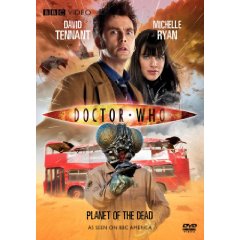 Had it been part of a 13-episode episode of “Doctor Who,” I suspect the latest special, “Planet of the Dead” would have been better received and subjected to less fan scrutiny than it has been since it first aired on the BBC earlier this year.

Now with a bit of time and the release of the episode on DVD and Blu-Ray (a first for “Doctor Who”), fans can take a moment to look back at the episode, free of expectations, and truly enjoy the best of the specials the series has produced since the series returned.

For what it is, “Planet of the Dead” is an amusing romp with the Doctor, once again, saving the world from a horrible alien menance.   It’s along the lines of some of the classic stories from the original series and while it’s not ground breaking, it’s certainly not a bad way to spend an hour.  I have a feeling this may be our last time to see the tenth Doctor truly relaxed and his usual hyperactive self and for that, “Planet” is worth the ride.

The release on DVD and Blu-Ray is an interesting one.  It contains a full “Doctor Who: Confidential” on the episode, offering a behind the scenes look at the production of the show.  Beyond that, the disc is fairly vanilla and U.S. fans used to the wealth of extras each episode gets in season box sets may be disappointed.  I expect a full bells and whistles box-set to come early next year when the specials are complete.

Until then, this release is economically priced and, if you have a Blu-Ray player, allow viewers to relive the episode in all its HD glory.