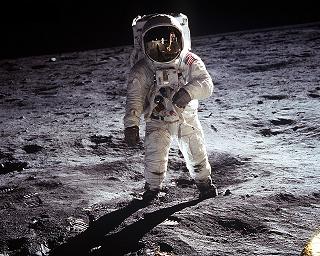 Forty years ago today, Apollo 11 made history as the first human beings landed on the moon.

And as the original astronauts from the mission–Buzz Aldrin, Neal Armstrong and Michael Collins–gather to celebrate the event, they have a new challenge for the next generation of space explorers–let’s go to Mars.

The astronuats lamented that NASA is planning a trip back to the moon and not to our neighbor, the red planet reports USA Today.

“The space race faded away. It was the ultimate peaceful competition,” said Neil Armstrong, 78, and it “did allow both sides to take the high road.”

On July 20, 1969, Armstrong became the first human to set foot on the moon, Buzz Aldrin the second. Michael Collins remained in orbit around the moon aboard the mother ship that would carry the three men back to Earth.

Collins, 78, said he had gotten to be part of the Apollo 11 crew through “10% shrewd planning, 90% blind luck.” At the same time, he said “sometimes I think I flew to the wrong place” — a reference to his belief that Mars is more interesting than the moon.

Aldrin, 79, also called himself “lucky” and pushed Americans to set their sights on Mars rather than the moon. “America, do you still dream great dreams? Do you still believe in yourself? Are you ready for a great national challenge?” he asked.

The crew will meet today with President Obama, who has a checkered history on support of human space exploration. During the presidential campaign, he endorsed President George W. Bush’s plan to send astronauts back to the moon, but last month the White House ordered a panel of independent space experts to reconsider that goal.

The three astronauts chose vastly different paths after the events that made them mega-celebrities. Armstrong taught engineering at the University of Cincinnati, then worked as an aerospace executive. He rarely speaks in public.

Collins wrote a memoir, headed the National Air and Space Museum and generally avoids the limelight.

Aldrin battled depression and alcoholism, a struggle chronicled in a book published this summer. He speaks widely, conducts frequent interviews and even appears in a new rap video