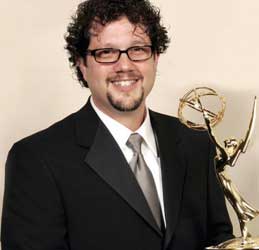 Composer Michael Giacchino is a busy man these days.    He provides the music for the TV series “Lost” and “Fringe.”  Fans can also hear his musical scores on several summer blockbusters including “Star Trek,” “Land of the Lost” and Pixar’s “Up.”

“In many ways it’s a very traditional score, as opposed to what “Ratatouille” is, which is a jazz-European thing, and “The Incredibles”, which is jazz, too, but more American orchestra. So this is a more traditional film score, which was really fun to do but also one of the most emotional movies I ever got to work on,” the composer recently told SciFi Wire.

“It is essentially a love story about Carl [voiced by Edward Asner] and his wife,” Giacchino said. “So it was just about going there and finding out [what] that means. What I ended up doing was doing this very simple waltz that grows and twists and turns through the whole course of the film. As Carl goes on this adventure, everything just changes, [and] the music changes with him and his character as he develops and he grows.”

The composer said that approaching both “Star Trek” and “Land of the Lost” was a unique experience for him because he has fond memories of both.

“I watched ‘Land of the Lost’ as a kid, you know, incessantly,” he said. “I loved it. Me and my brother watched it every Saturday. And so getting to work with [creators] Sid and Marty Krofft, that was fantastic. [When it comes to the song,] there is a little surprise in the film, yes, but I don’t want to ruin it. But I wasn’t going to do that film and not hint at that theme somewhere.”

And he even got to hear star Will Farrell sing part of the theme tune.

“It is very funny when he does it. He is great in this,” he said.

As for “Star Trek,” Giacchino said his biggest fear would be to “replicate” the themes already used by other composers over the long musical history of the franchise.

“”I thought, ‘Oh, God. What am I going to do?’ Because all this great space music has already been written, and so it was truly a fear. And then, in the end, we all just sat down and said, ‘You know what? This is really just a story about two guys who become friends. And let’s not forget that,'” he said.