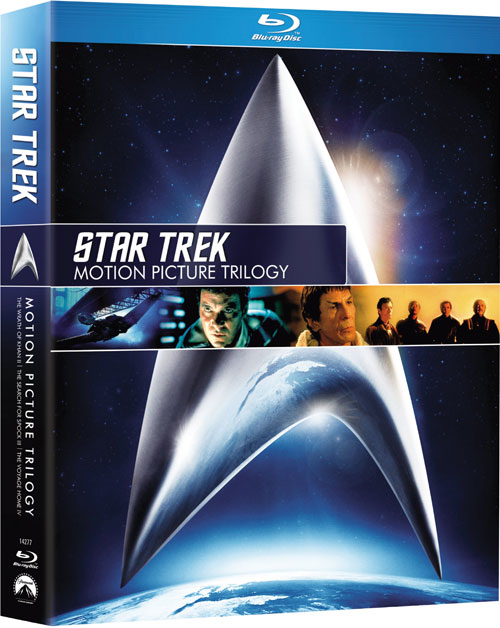 Hot on the heels of the franchise’s biggest opening weekend ever at the box office, Paramount Home Entertainment has decided to hit consumers salivating for more Kirk and Spock with a nice helping of nostalgic Star Trek.

Hoping to please long time fans of the series, and new Trekkies converted by J.J. Abrams explosive reinvention, Star Trek hits both BluRay and DVD in multiple sets, targeting casual and compulsive Trek mania. Let’s break it down, shall we?

Saving the easy argument of price, why exactly would anyone want to purchase a three-movie combo pack over one that includes all six pictures featuring the original Star Trek gang AND a new special feature shot in HD? Well, the answer is surprisingly simple: The Motion Picture Trilogy contains the best of that generation’s Star Trek films.

Capped off with the series’ crown jewel, The Wrath of Kahn, Star Trek: The Motion Picture Trilogy also includes fan favorite flicks The Search for Spock and The Voyage Home.

For those familiar with the series, and who are humble enough to admit it, these are the best flicks that the original crew put out, making this a much more economically friendly purchase for those who already own all the movies or only have a fleeting interest with Trek.

Plus, another detriment to purchasing The Complete Collection is, with the exception of the aforementioned, roundtable HD interview, all of the extras have been previously released. So why shell out more money, for worse films, when you’ve already seen nearly all the discs have to offer?

Finally, aside from Wrath of Kahn, which has been completely remastered, there is a big, visual error on these Trek BluRay discs. In an attempt to avoid a remaster, PHE reduced film grain using a noise reduction tool, which tarnishes the visual quality of the other five pictures. This is a shame for Trekkies, especially those hoping to show off their high definition technology. Luckily though, for those of you who get the Motion Picture Trilogy, you not only save money, but you also get the only film with a true remaster!

For those of you interested in seeing the series that started it all and its incredibly successful follow up, The Next Generation, PHE by way of CBS DVD has a fantastic offer. Best of Star Trek discs!

Offering four of the best episodes each show had to offer, The Best Of Star Trek The Original Series and The Next Generation hit home at a budget price guaranteed to hook fans. Join Captain Kirk and Picard as they explore the galaxy, protecting it from Borgs, Romulans and Tribbles! A great way to get introduced to a science fiction phenomenon!

Star Trek has gone mainstream folks, and while these discs might be better suited for the newer, casual Trekkie, one thing is safe to say: This franchise is about to boldly go where it has never, ever gone before!