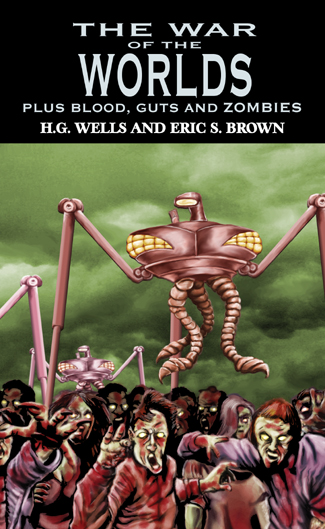 Following the success of “Pride and Prejudice and Zombies,” you just knew there’s be a run on inserting zombies into classic pieces of public domain literature.

Next up–H.G. Well’s alien invasion classic, “The War of the Worlds.”

Coscom Entertainment is publishing Eric S. Brown’s “The War of the Worlds Plus Blood, Guts, and Zombies” today, taking H.G. Wells’s science fiction classic and added in the zombie apocalypse.

“What if it wasn’t just aliens that landed that fateful day when ships from Mars appeared in the sky?” asks Publisher A.P. Fuchs. “What if something else happened, something that would change the face of the planet even more than an alien invasion? What if the dead began to rise and stalked the living in addition to beings from another world?”

Brown has taken the regular narrative of H.G. Wells’s book and “blended his own thoughts on a zombie apocalypse into it seamlessly,” says Fuchs. “I was astonished at how much he was able to mimic Wells’s voice so perfectly when I first received the manuscript. Unless you know the original forwards and backwards, you won’t know where Wells leaves off and Eric Brown begins. Aside from the zombie bits, of course.”

From the book’s jacket copy: “The invasion begins… and the dead start to rise. There’s panic in the streets of London as invaders from Mars wreak havoc on the living, slaying the populace with Heat-Rays and poisonous clouds of black smoke. Humanity struggles to survive against technology far beyond its own, meeting fear and death at every turn. But that’s not the only struggle mankind must face. The dead are rising from their graves with an insatiable hunger for human flesh. Friends, neighbours and loved ones lost to the war of the worlds are now the enemy and the Earth is forever changed. It’s kill or be killed, if you want to survive, otherwise you might become one of the walking dead yourself.”