Purchase a copy of “Ender in Exile” 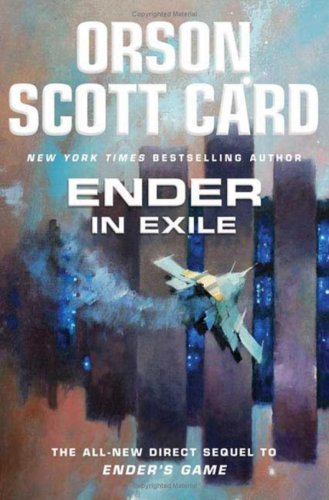 Orson Scott Card’s Ender’s saga holds the distinction of being one of the only series to win back-to-back Hugo Awards.Â  Both “Ender’s Game” and “Speaker for the Dead” deservedly picked up Hugos when published and now, 30 years and several sequels later, Card revisits the time period between “Game” and “Speaker” in his latest novel in the Ender storyline.

After creating the parallel novel, “Ender’s Shadow” and the subsequent series about Bean, Petra and Peter’s rise to power in the world, Card shifts the focus of the series back to the title character, Ender Wiggin. The war with the alien race, the Buggers is over. Ender has won the war, but at what price? Card provided some hints to this in the final chapter of the original “Ender’s Game” but now he takes readers back to the time between stories for a novel that examines the ramifications and implications of what Ender Wiggins did.

What if you were 16 years old, had just won a war and were now treated as a political football? Also, considering what we find out in later novels about how the war was won, what impact would that have on a young man who thought he was playing an elaborate video game and instead was sending soldiers to their death and committing genocide? Card ably explores all of these questions in “Exile,” showing us the impact not only on Ender but on his family. We’ve seen pieces of the pain Ender’s parents felt on losing their son, but here it is brought home in a particularily compelling way, as we see Ender’s parents realize they must give up their son yet again.

The novel also serves to transition Ender from the end of “Game” to the character we see in “Speaker.” Card is able to do this superbly and the chapters that look at Ender’s character are compelling and readable.Â  Card inserts a fascinating dynamic between Ender and the commander of the colony ship Ender is on, as the commander seeks to try and one-up Ender and seize power.Â  Watching Ender slowly bring the comander in question down to size and the way in which he does it makes for one of the more satisfying twists in the novel.

And yet, as I read this one, I had to wonder if it was really meant to be a novel. Yes, the story does show us the character arc of Ender and various others and it will answer some questions left over for the “Shadow” series. (In fact, I’d almost say if you haven’t read the “Shadow” series, you’d be better served to read them before tackling “Exile.” But there are some points where “Exile” feels more episodic than other novels in the series. At several points, I found myself getting impatient to have the focus shift back to Ender rather than on some of the sidesteps along the way. It’s Ender who is the most compelling character in the story.

However, any new novel by Card is something to be savored and a return to the Ender Universe is always welcome. It’s also nice to see Card get back to form after his disappointing novel, “Empire” last year. If you’re a fan of the “Ender” universe, this is a welcome and needed addition. If you haven’t read any of the Ender’s saga yet, I implore you to seek out “Ender’s Game” first and settle in for one of the best science-fiction sagas out there.