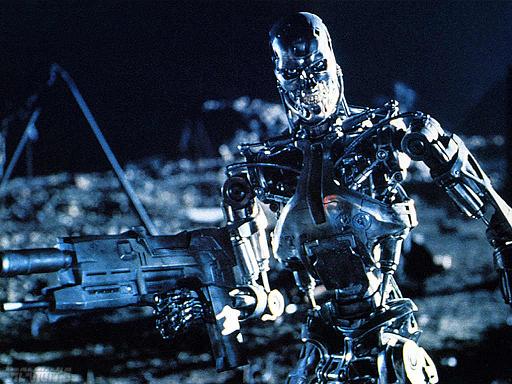 It’s no secret I like “Terminator: The Sarah Connor Chronicles”. It’s true I am pretty harsh on some of the characters when commenting on the forums, but I realize they (the human characters) are at a serious disadvantage. Per force their characterizations wear the familiar trappings of countless stories that came before them; stories of human quests, struggles, fears, heroism, pettiness, cowardice, and a host of neuroses. All these stories have been thoroughly explored in every imaginable media long before these particular characters were even a gleam in someone’s word processor.

But the Terminators . . . those machines are something we can’t help but focus on, and the writers do give us plenty to focus on. I want to write a commentary on the implications the various incarnations of these machines, if you would please pardon the term, have on the developing story of “Terminator: SSC.” Before my foray into speculation, I feel I should present a short summary of these most interesting machines.

But even before we do that, we must turn a blind eye to the one flaw that runs through the movies and the series. That is, we know there are sophisticated killer robots out there. Practically indestructible, can melt, shape shift, and pretty much know everything. For some reason the future machines powers-that-be choose to limit how many of these models they send back. Maybe they too are suffering credit, housing, and economic crunch, and do not want to blow their budget, even if it would be on something that might actually have a chance of succeeding. OK; once we agree on that, we are set to proceed.

The Basic Brute Force Model (BBFM) terminator
These terminators are the cheap bargain models. They are humorless, devoid of any personality, dedicated to one task. Viewers immediately recognize these as being throw-away models. They appear along with the dreaded music, wreck some minor havoc, kill a few hapless humans, and then are dispatched by our heroes in a way pleasing and entertaining to the viewer. Usually there is a fight, and while at first they look fairly durable, and about evenly matched to the models we’ll discuss below, they will end up tied up in knots or otherwise incapacitated. Truly these embody all the reasons why humans hold out hope against the machines. Heck, we just recently found out some BBFMs can be killed merely by poking them in the back with a rod and extracting what looks to be a cheap junction box with a red blinking light and some wires. Although, before you attempt that, make sure you donâ€™t mistake these inferior BBFMs for the later model with the reinforced titanium alloy chest. You can hit those with a semi-truck, and they keep right on ticking. Why, you can separate their head from their body, and they still keep going.

The Labor Force (LF) terminator
Apparently the illegal labor force is more diverse than people think. It seems society is awash with terminators that were sent back specifically to perform some housekeeping tasks (preserve (or blow up) a power plant here, set up a traffic system there, steal and store materials in heavily fortified bunkers for use by future machines elsewhere, and so on). Again, we’ll ignore the timeline and concentrate instead on these brave workers. We’ve only seen a few models, and they are impressive indeed. Big hulking things, able to lift massive crates, drive trucks, and operate complicated machinery and electronics. But they do appear vulnerable to their programming, as in they shut down once said program is completed. They really don’t pose any threat unless you start poking them with a gun, and wake them up.

The Killer of the Future Savior of Mankind (KFSM) terminator
Now these guys; you have to admire these guys. Focused on the task, resourceful, skilled in investigative work, and, although by en large lacking in interpersonal skills, they are capable of wry humor and even the odd ironic quip. While it’s never really explained, they also possess the unique ability to be at the right place, and right time, to nearly, but not quite, intercept their intended target. The thing you have to admire about these guys is the Bourne-like quality of immediately accepting failure, putting it past them, reassessing the situation, and start executing the next plan for success without betraying any frustration or emotion of any kind. Role models, they are; they teach us the value of perseverance, of not losing our heads to failure . . . er . . . except that one time. But even then, they show us you can recover from that, and come out as a better and improved version.

The Liquid Can Do Anything (LCDA) terminator
This is actually the first terminator model that makes us a little envious. I’ll use “guys” as a generic, non-gender specific term to refer to LCDAs since these things are pretty much liquid unobtanium, and can replicate flesh, fabric, and bad make-up at will. Anyway these guys are the epitome of robotic achievement. Gone is the stilted, semi-mechanical walk, the strained fake smiles, and the expressionless face; these guys move with a fluidity (get it? Fluidity! . . . I crack me up) indistinguishable from humans. It’s like if you’re watching a real human . . . except around kids. Around kids they seem unsure and stilted, almost as if teetering between deciding to pat the kid on the head, or strangle it. Come to think of it, perhaps that is very close to normal parents at that. We really don’t know what these LCDAs are doing, but it’s fun to speculate . . . later.

The Enigmatic Protector of the Future Savior of Mankind (EPFSM) terminator
This is a unique model, eschewing the propensity for the machines to take advantage of mass and size. Personally, if I were to send back a terminator to protect my life sometimes in the past, I would choose the most massive one I found. Sure, this one may be easy on the eyes, but unless possessing of some secret power, a decided disadvantage when dealing with BBFMs or KFSMs. Although, I have to say these models appear to be fairly resourceful. They are also capable of entertaining insights. And they always know when a fight is coming up because they change into appropriate clothing well ahead of time. And they are complicated . . . because that’s what you want when the future of mankind is at stake. You want something unstable, unpredictable, and conflicted. In other words, you want something as human-like as possible.

And there you have it; the terminators in a nutshell. Next, we’ll take a closer look at the relationship of humans to terminators, terminators to terminators, and less interesting, but still entertaining, humans to humans when around terminators. It should be interesting indeed. But, in the spirit of current television entertainment practices, I’ll first go in hiatus for an undetermined period of time so I can think up and write what I’m promising you will next read. Whatever it is, I’ll make sure to act as if reading it will be the single best thing any reasonable human could possibly do.