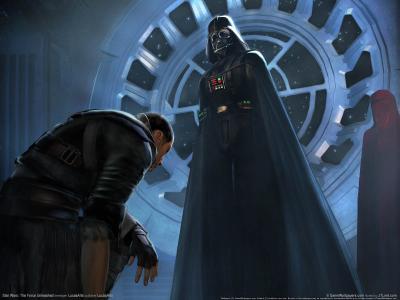 The latest “Star Wars” tie-in videogame “The Force Unleashed” has been heating up the sales chart across several content outlets this summer, leading to speculation that George Lucas might consider adapting the storyline for the big-screen in the near future.

The game sold a million units in its first five days on the market, has a tie-in novel on the bestseller list and features a graphic novel adaptation that is selling well in comic stores across the nation. It would seem that fans have embraced the storyline of Darth Vader training a secret apprentice, even more so than this summer’s theatrical release of the soon-to-be television series, “The Clone Wars.”

And while it may sound crazy at first, a big-screen “Force Unleashed” may not be that big a leap according the game’s project leader, Haden Blackmen.

“Oh, that would be incredible,” Blackman told the Los Angeles Times’ Hero Complex blog. “And it’s not impossible. Never say never. George [Lucas] has looked to tell new ‘Star Wars’ stories through the games and with the entire Star Wars Expanded Universe, and then he has also shown a willingness to let the characters come into the films. Look at Aayla Secura, a creation in the [Dark Horse] comic books who became part of the theatrical films.”

Blackman said that if the big-screen adaption became a reality, it would be a testament to his team for marrying solid game-play with great storytelling.

“It’s an incredible time,” he said, “to be telling powerful stories in this fairly young medium.”

The Hero Complex blog went on to say, “Lucas is clearly pleased with this new entry to the broader “Star Wars” story and I would not be surprised for a moment to see it on a theater marquee at a CG-animated project in the next few years, especially with the intensifying Hollywood interest in video games and toys as film properties. There’s also the very real power of putting Darth Vader on a movie poster in the theater lobbies of America.”

Speculation is the film would be done using digital animation, along the lines of the recent “Clone Wars” release.Â  However, right now it’s all just speculation and rumor.Â  Until we get confirmation, fans can enjoy the story at a bookstore, comic shop or game platform near you.