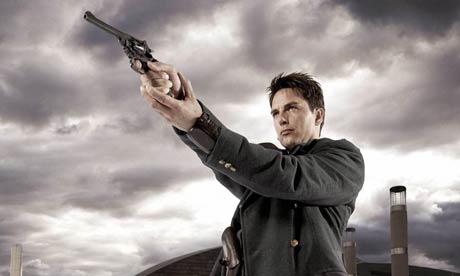 The good news for “Torchwood” fans is the series three has begun filming in Cardiff.Â

The popular “Doctor Who” spin-off series began shooting its third season this week.Â  As previously reported, the third series will be a single-storyline, five-part shortened season for the hit spin-off.Â  The five episodes are set to air as a “Torchwood” special event/week sometime in early to mid 2009 in the UK.Â

“The new series of ‘Torchwood’ is hugely bold and promises to be bigger and better than ever,” Davies said in a statement. “The audience is in for an amazing ride. This series is one big serial and the most ambitious story we’ve ever made, and we’ve got plenty of surprises in store.”

According to SCI FI Wire, special guests in the five part series include Peter Capaldi, who plays the role of Mr. Frobisher, a civil servant who is hiding a terrible secret; Paul Copely as Clem, a survivor still haunted by his past; and Liz May Brice as Johnson, a cynical covert government agent determined to expose Torchwood.

Before they return to the TV screens, “Torchwood” willÂ feature in BBC Radio 4’s day long coverage of the CERN Big Bang experiment on September 10.Â  The special radio special is expected to air around 2:15 in the afternoon in the UK.Â

For those who missed “Torchwood”‘s second season, it comes to DVD in September.Â  The first season will also be issued on Blu-Ray in the United States. The third season of “Torchwood” will air in 2009 on the BBC, BBC America and HDNet.