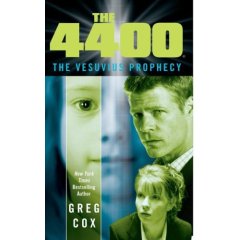 Fans who are missing their summer-fix of new installments of The 4400 may have some hope, thanks to Pocket Books.Â  While the series isn’t returning to our television screens, the universe is far from done with the publication of the first original novel, The 4400: The Vesuvius Prophecy.

Written by genre-veteran and best-selling author, Greg Cox, the Vesuvius Prophecy takes place during the initial run of the show.

Eleven-year-old Maia can see the future, and she’s never wrong. So when she has a vision of Mount Rainier starting to erupt, the National Threat Assessment Command takes her warning very seriously. But to track down the unknown returnee who may trigger the volcanic eruption, NTAC agents Tom Baldwin and Diana Skouris must uncover the astounding truth behind one of the greatest unsolved crimes of the twentieth century….

And they’ve got competition. Ruthless enemies are working against them and somehow managing to keep one step ahead of the desperate agents. With the future closing in on them, Tom and Diana must foil a lethal conspiracy — before Seattle and the entire Pacific Northwest go the way of ancient Pompeii.

The novel is available at bookstores everywhere in paperback or can be ordered via Amazon.Â  Cover price for the novel is $7.99.