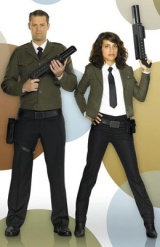 Fans looking for summer-weight sci-fi on their television screens don’t have to look any further than ABC Family’s new series, “The Middleman.” Airing Monday evenings at 10 p.m. EST on the cable channel, “The Middleman” is a refreshing, fun series about the people who deal with exotic problems such as mad scientists taking over the world and super-intelligent apes who’ve watched mafia movies one too many times so we don’t have to.

Created by “Lost” writer Javier Grillo-Marxuach, the series is based on a popular comic book series of the same name. The comic book is the brain-child of Grillo-Marxauch and Les McClaine.

The series stars Natalie Morales as Wendy Watson and Matt Keeslar as the title character, the Middleman. We were fortunate enough to interview both on our Website.

While working a temp job at a laboratory, Wendy is attacked by a strange creature when an experiment goes horribly wrong. Instead of freaking out, Wendy defends herself against the creature, accepting the reality of the situation and making her a prime candidate for recruitment by the Minuteman. Wendy is eventually persuaded to take the job as the new recruit and help defend the world and civilization as we know it.

Filled with pop-culture references, the show plays up the differences between Wendy and the Middleman. Wendy’s sense of humor is broad and full of sarcasm, while the Minuteman is more straight-laced but has a drier wit and sense of humor. The chemistry between the two leads as they save the world and the bounce off each other is well done and helps drive the show.

Also included in the Middleman’s universe are Ida, the secretary who is an alien in disguise, Wendy’s roommate who has a crush on the Middleman (and whom Wendy has forbidden the Middleman to date), the neighbor who quotes pop song lyrics to Wendy as she enters her apartment and Wendy’s boyfriend, Ben.

The Middleman is fun and refreshing. While it does have intriguing plots, it takes a page from the Joss Whedon and “Eureka” handbook by balancing it with a quick wit, great one-liners and a multitude of funny pop culture observations. Fans can catch up on the series Mondays on ABC Family and watch the entire series streaming on ABC Family’s web-site at www.abcfamily.com/middleman.