“[Wanted] proves yet again that the director just might be the most important thing to come out of Russian cinema since filmmaking pioneer Sergei Eisenstein.” 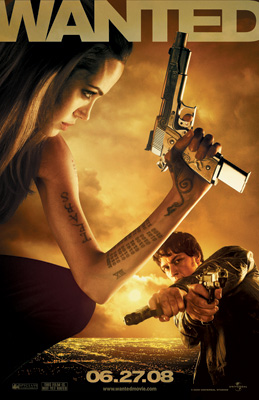 A ballet of bullets and a symphony of violence, Wanted is a flawlessly orchestrated action masterpiece that is so hip, stylish and smart you won’t feel the need to apologize for being so giddy over a summer blockbuster. Helmed by Timur Bekmambetov, his explosive foreign touch proves yet again that the director just might be the most important thing to come out of Russian cinema since filmmaking pioneer Sergei Eisenstein.

Apathetic accountant Wesley Gibson (James McAvoy) finds his life turned upside down when he is abducted by a group of super assassins called The Fraternity. Having existed for a thousand years The Fraternity works to restore balance to the world by ridding it of evildoers, and as it turns out, Wesley’s long lost father was a member of the elitist group. Having the ability to control their adrenaline as it pumps through their bodies at over four hundred beats-per-minute, these trained killers can manipulate nearly every law of physics. Having inherited this same power, Wesley is trained to become apart of The Fraternity in order to hunt down and execute a rouge agent that assassinated his father before the killer, named Cross, has the chance to pick off any more of the group’s remaining members.

Already known by film aficionados as a visionary talent to watch, director Timur Bekmambetov has made a stunning Hollywood debut. While the story takes a departure from the graphic novel, tonally Wanted is everything an action junkie could want from summer movie cinema. If Fight Club spun into an out of control world of assassins rather than a tale of overly aggressive split personalities, you’d probably get an idea of where Wanted is coming from.

Filled with a tremendous cast of actors, including a sumptuous Angelina Jolie and a muscular James McAvoy being supplemented by screen legends like Morgan Freeman and Terrance Stamp, Bekmambetov has directed his talent to work off each other’s reactions more so than overly populating the film with useless dialogue. While there is still more than enough jabber to explain the complex and constantly twisting plot, you can really see the actors working off one another, making each emotional beat more dramatic and joke far funnier. Perfectly highlighting this concept is Jolie who, except for one powerful monologue, barely utters more than a few words at a time, yet makes every gaze at McAvoy’s Wesley count.

However the true star of Wanted is not any of the picture’s principal players, rather the film’s impressive display of violence. With his unique visual style Bekmambetov puts on display some of the most ferociously gorgeous action ever put to celluloid, and for once the high points of the preview barely touch the surface of the film’s biggest set pieces. Completely sleek and over-the-top, the violence portrayed in Wanted is so visually driven one could almost call it sexual in nature. Beautifully lensed, Bekmambetov uses nearly every camera trick in his arsenal to capture the orgasmic chaos. Ramped up speeds, gorgeous slow motion, aggressive pulsation filters and some of the most fantastic rack focuses ever seen make Wanted a visual feast that will leave you breathless.

Sergei Eisenstein forever changed how images are juxtaposed to create meaning through montage, or editing. Nearly a century later another Russian pioneer, Timur Bekmambetov, is well on his way to recreating the action film as we know it. In a genre where it becomes increasingly difficult to out due one another, Wanted has brought the bar to a whole new level of intensity.