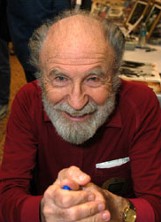 Barry Morse, the actor who hunted down David Janssen for years as Lt. Phillip Gerard is dead at the grand age of 89 after suffering a brief illness.

Morse had one of the most recognized faces in show business after his long stint on the American television series “The Fugitive,” which ran for 5 seasons with some of the highest ratings ever acquired by a weekly action-drama series. The last episode of the program that saw Dr. Richard Kimble (Janssen) and Gerard (Morse) finally catch up to the one armed killer of Kimble’s wife was one of the most watched finales in television history.

The actor was born in London in 1918. He got his early training at the Royal Academy of Dramatic Art in London and made frequent appearances for the British repertory and West End theaters.

In the 1950’s Morse moved to Canada, took up acting on both radio and television and after over 3,000 different roles in nearly 12 years landed the role in American televison series that would change his career forever.

After his chase of “The Fugitive” ended and the real criminal finally met his just due, Morse moved to the Moon playing Professor Victor Bergman in 1970s science fiction series “Space 1999,” with the husband and wife acting team and his good friends Martin Landau and Barbara Bain. The show ran for 3 seasons affording Morse steady work for over a quarter of century since moving to the colonies.

His last on screen appearance occured in 2005 playing opposite Patrick Swayze in the made-for-TV spy thriller “Icon.”

Barry Morse dedicated much of his life to theater work, serving as the Artistic Director of the Shaw Theater in Niagara on the Lake. He also labored to ensure that the collective works of his idol, George Bernard Shaw would continue on in theater long after his death.