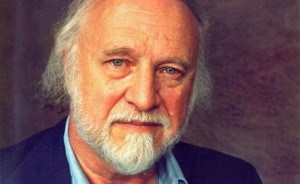 Prolific writer Richard Matheson has passed away at the age of 87.

He died at his home in Los Angeles on Sunday, according to his son.

Matheson’s writing career spanned sixty years and included more than 25 novels and nearly 100 short stories, plus screenplays for TV and film. Several of his novels were made into movies.

Matheson was also responsible for writing several episodes of “The Twilight Zone,” as well as editions of “The Alfred Hitchcock Hour,” “Rod Serling’s Night Gallery,” “The Martian Chronicles” and “Amazing Stories.” His “Twilight Zone” installments included “Nightmare at 20,000 Feet,” which featured William Shatner as an airplane passenger who spots a creature on a plane’s wing, as well as “Steel,” which inspired the 2011 film “Real Steel” starring Hugh Jackman.

“I loved Richard Matheson’s writing, and it was a huge honor getting to adapt his story `Button, Button’ into a film,” posted “Donnie Darko” and “The Box” director Richard Kelly on Twitter on Monday.

Matheson influenced several generations of storytellers. Among them were Stephen King, who dedicated his 2006 novel “Cell” to Matheson, and Steven Spielberg, whose first feature-length film was the made-for-TV movie “Duel,” based on the Matheson short story of the same name.

“Richard Matheson’s ironic and iconic imagination created seminal science-fiction stories and gave me my first break when he wrote the short story and screenplay for `Duel,”‘ said Spielberg in a statement.  “His `Twilight Zones’ were among my favorites, and he recently worked with us on `Real Steel.’ For me, he is in the same category as (Ray) Bradbury and (Isaac) Asimov.”

Matheson was scheduled to receive the visionary award at the Academy of Science Fiction, Horror and Fantasy Films’ Saturn Awards on Wednesday. The organization said the award will be presented posthumously and the 39th annual ceremony would be dedicated to Matheson.

“We are heartbroken to lose a writer of towering talent, unlimited imagination and unparalleled inspiration,” said Robert Holguin, the academy’s president. “Richard was a genius whose visions helped bring legitimacy and critical acclaim to science fiction and fantasy. He was also a longtime supporter of the academy, and everyone associated with the Saturn Awards feels emptier today to learn of this enormous loss.”

Matheson is survived by his wife and four children.