“Cloverfield is likely the best movie that you’ll never want to watch again.” 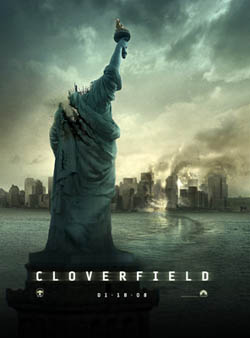 Cloverfield is more than a movie; it is an experience that will leave you completely and utterly exhausted. A poignant blend of post 9/11 terror and our cultural obsessions with mass media and technology, Cloverfield is a giant monster movie with something to say, featuring a vantage point the likes of which audiences have never seen before. In fact Cloverfield is likely the best movie that you’ll never want to watch again.

Kept under wraps for more than half a year, the J.J Abrams produced Cloverfield has teased audiences with an impressive marketing campaign, which used striking imagery of a tattered and ruined Manhattan to elicit curiosity and excitement. Cloverfield reviews a ninety minute, mini-DV tape that was discovered after the horrific event. The footage follows four friends as they desperately search to find a missing companion, putting them dangerously close to an unstoppable creature of monstrous proportions.

Part of the impact that Cloverfield achieves is due to the clever marketing which kept the experience hidden, fresh and alive. The trailers and clips only showed enough to whet audience’s palates, leaving the majority of the film to be experienced in a darkened theater, and without a doubt this is a movie that must be seen in a cinema.

However audiences need to be forewarned. While many will likely compare the camerawork in Cloverfield to the 1999 horror smash, The Blair Witch Project, this statement will only minutely prepare you for what you will see in this long awaited, giant monster flick. While the camera work is indeed handheld, there are two striking differences Cloverfield and the aforementioned horror film.

In the Blair Witch Project filmmakers used the “shaky-cam” style to make the most out of their extremely limited budget. In Cloverfield director Matt Reeves had an epic scale to work with, and because of that, audiences will want to focus on the details on screen. The imagery is indeed striking; the creature leaves Manhattan utterly obliterated. The camera moves without edits through 360 degree sets, making the experience visceral and immediate. As a culture we have been trained by Hollywood to let our eyes focus on the details, here they are given to us and then instantly pulled away. This drastic and uncomfortable change to the phenomena of the persistence of vision will leave some audiences frustrated and others entirely motion sick.

The pace of the movie also moves far more frantically than The Blair Witch Project. Reeves gives audiences little time to regroup and focus, again twisting Hollywood staples and making a gutsy film that dares to leave questions unanswered. This is not a film that wants to tell you why or how a giant monster attacked New York, just that’s its happening and we’re right there, caught in the action.

With all the hype surrounding the film, the name most easily attributed with the title has been J.J. Abrams. The Lost television producer and director of Mission: Impossible III had an undeniably important role in bringing this film to life, but at the end of the day Cloverfield is Matt Reeves’ triumph. For a feature length directorial debut, Reeves has made a film that will indelibly leave its mark on American culture.

The one stumbling block the picture hits is its failure to translate the characters’ fear to the audiences. Perhaps it is because viewers are scrambling to catch up with the camera or Reeves’ lack of cinematic experience in sustaining tension over a feature film, but fear is not the overriding motivation for watching Cloverfield. However the film does manage to take away the security blanket that typical giant monster movies usually offer as safe havens, helping to reinvent the scares within the genre. Of course telling you how and why would only ruin the fun.

Cloverfield is a film that will turn audiences on their heads. It is the first film that will be universally commended as being worth all the hype. The camera work literally makes the picture look and feel like nothing you have ever seen before, but for some audiences, including myself, repeat viewings might be too difficult to watch. Cloverfield is just as likely to terrify audiences as it is to cause them to lose their lunch. How’s that for a cinematic roller coaster ride?