COMING TO A THEATRE NEAR YOU: “THE MENAGERIE” REMASTERED! 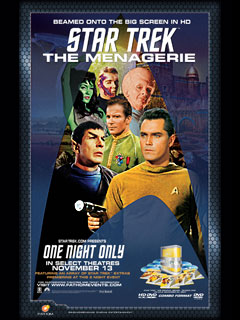 On Tuesday, November 13, the two-part Star Trek Remastered version of “The Menagerie” will beam onto the big screen in a special engagement with selected theatres!

The screening — a first for Star Trek — will be seen in nearly 300 theatres across the U.S. and Canada. A one-night only event, the screening will also feature a special introduction by Eugene “Rod” Roddenberry, son of Star Trek creator Gene Roddenberry, plus a behind-the-scenes look at the making of the Remastered series.

Be a part of history and make sure you beam over to your local cinema to witness Star Trek on the big screen like you’ve never seen it before!