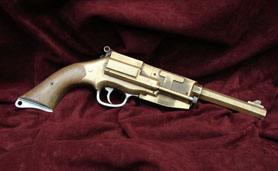 In Serenity, Captain Malcolm Reynolds leads a band of six rebels on the run from the ruling Alliance in a new solar system 500 years in the future. Roguish and resourceful, Mal prizes his ship, his crew and the trusty pistol that has saved him in countless action-packed battles.

Quantum Mechanix’s mold for the replica was taken directly from the stunt pistol carried by Nathan Fillion in his portrayal of Malcolm Reynolds. However, the screen-used prop was just a solid block of resin. QMx has taken its design several steps beyond the movie version, adding separate steel- and bronze-colored resin parts to ensure perfect color separation and accuracy. The pistol is infused with a high-quality metal bronze powder to better simulate weathering. Silver components – such as the trigger, trigger guard, hammer and screws – are infused with steel powder and weathered with a black dye wash.

The pistol is then put through a multistage staining process that ages the replica and makes it look like the well-used sidearm it’s supposed to be. Separately cast and stained resin grips are attached with Allen-head metal screws, faithfully re-creating the wood-grain look of the screen-used prop.

The minimal amount of paint used in the creation of the stunt pistol is a chip-resistant polymer that is airbrushed by hand onto each model, making it more durable and less likely to scratch or discolor with use.

The Malcolm Reynolds stunt pistol is cast in professional-grade resin and weighs approximately 1 pound, making it a great holster pistol for cosplay or display. The pistol comes boxed with a Moses Brothers Firearms Certificate of Authenticity with all manufacturer’s specifications outlined and a license issued by the local authorities on Shadow that entitles the holder (there’s a place to enter your name) to carry this sidearm.

As an added bonus, the first 1,500 pistols will also include a rolled 14″ x 17″ poster with the Barlow’s Guide to Small Arms entry on the Moses Brothers Self-Defense Engine Frontier Model B (that’s the make of Mal’s pistol).