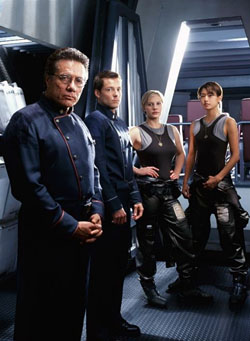 The ever-escalating format war for the generation of players keeps heating up. Last week, we reported about how certain studios will only issue their summer blockbusters on their propriatary formats (“Spidey 3” only on Blue-Ray from Sony, “Bourne Ultimatum” only on HD-DVD from Universal).

The next salvo in the war for the hearts and dollars of sci-fi fans has been fired.

The long-rumored HD release of “Battlestar Galactica” is coming. But it’s only coming to HD-DVD.

Season one of Ron Moore’s re-imagined “Battlestar Galactica” will be released on HD-DVD on Dec 4th. The six-disc set will start with the original four-hour miniseries and include all 13 episodes from “Galactica”‘s first season. The episodes will be shown in widescreen with Dolby 5.1 sound and English Dolby 5.1 plus. There are a plethora of extras on the set as well, including featurettes and commentaries by Ronald Moore. Follow the link in the previous sentence to drool over the wide variety of extras.

In related news, December 4 will also featured the DVD-release of the extended cut of “Razor,” the two-hour, “Pegasus” centered film that airs on SCI FI in November. This DVD will integrate scenes of a young William Adama back into the storyline. These scenes will be presented as mini-sodes on SCI FI during the October airings of “Eureka” and “Flash Gordon.”