After two movies of running around Europe trying to discover his identity, Jason Bourne brings his story to a close with The Bourne Ultimatum, a film that is brimming with enough adrenaline filled chase sequences that it will leave your nails bitten down to their cuticles. 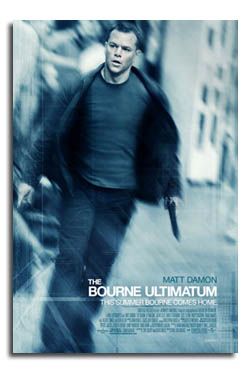 Perhaps the greatest trick in Bourne’s vast arsenal of super-spy moves has always been fooling audiences into investing so much energy into three films that essentially equate to one long chase. What makes each film work individually is the use of an old Hitchcock technique, having a valuable McGuffin at the core of each story.

For those unfamiliar with the term, a McGuffin is nothing more than a plot device used to drive forward the story in a thriller. It can be almost anything, as long as all the characters are after it. In the case of the Bourne Ultimatum, they are files locked away in an NSA vault that not only hold the key to Jason Bourne’s (Matt Damon) past, but they also contain documents with the power to bring down some of the most powerful and corrupt government officials in the United States.

The whole point of having a McGuffin isn’t to obtain it, but rather to immerse audiences in the wild ride on the way to obtaining it. Luckily for The Bourne Ultimatum, director Paul Greengrass approaches the second sequel with as much raw bravado as his last Bourne effort. The action is fast and ferocious, yet even with Greengrass’ trademark, shaky-cam style, audiences never manage to lose track of what is happening on screen.

On more than one occasion the handheld work in Bourne Ultimatum breaks so many rules of shot composition it would make old-school Cinematographers cringe, yet there is almost no arguing that Greengrass has nearly perfected the method. Where much of the cinematography in Bourne Supremacy felt messy, this time around the shots feel far more focused. The camera always seems to catch the right moment at the right time. Plus if it weren’t for the handheld work, mind blowing shots such as Matt Damon jumping from building to building via window sills might not have been possible.

Of course what is good cinematography without interesting and compelling characters to populate the lush frames? All the principle players return for the third Bourne outing, again delivering solid performances. Matt Damon, risking life and limb, hones in his best performance yet as the unflinching Jason Bourne.

Other than chasing McGuffins, one thing that the franchise has always done well is filling the roles of villains with top-notch character actors. David Strathairn and Albert Finney do a phenomenal job carrying on the great tradition the series started with Chris Cooper and Brian Cox.

Mixing forceful performances with some of the best practical special effects ever shot makes the hunt for the second sequel’s McGuffin quite the visceral thrill ride indeed. Even though Bourne doesn’t topple buildings or single-handedly take down F16s, Bourne Ultimatum is a spectacular action film that will keep audiences engrossed the whole way through.

If it’s true and Bourne Ultimatum is to be the last in the series, then Greengrass has done a nice job bringing the story full-circle, even capping the picture off with the same closing song that ended Bourne Identity. Last one or not, one thing is for sure, this Bourne kicks ultimate butt.