True Confession: When you’re one of a pool of reviewers, as we are here at Slice of SciFi, there’s competition for certain movies. You know, everyone wants Star Wars and similar. But there’s also a reverse competition – who’s going to take the movies none of us actually want? I took one for the team in saying I’d review Hitman: Agent 47. Of the several action franchise movies without their original stars and/or creative teams that are coming out right now, this one looked the most palatable. (I turned down the upcoming Transporter movie like a boss, for example.) So I went into this movie with literally zero expectations.

Setting the scene – there were two premieres going on at the theater. One was for a movie I’m sure will make money but which I have less interest in than most coming out right now since I’m not fond of any of the stars. The other was Hitman. And we were in the tiny theater and there were literally only press and there were less than 20 of us – and each of us had brought a guest with us, so you do the math. Everyone was in there, taking one for their respective teams. It was an audience filled with people expecting to hate what they were going to sit through for 90 minutes.

So, imagine my surprise when… I enjoyed this entire movie. (For those keeping score at home, the hubs enjoyed it, too, though not quite as much as I did.)

The Hitman video game has a complex backstory that I vaguely know about. However, you don’t need to know it, or to have ever played the game, to enjoy this movie. They cover the required backstory well without it being boring or pointless. Anyone can walk into this movie cold, as I did, and know what’s going on. 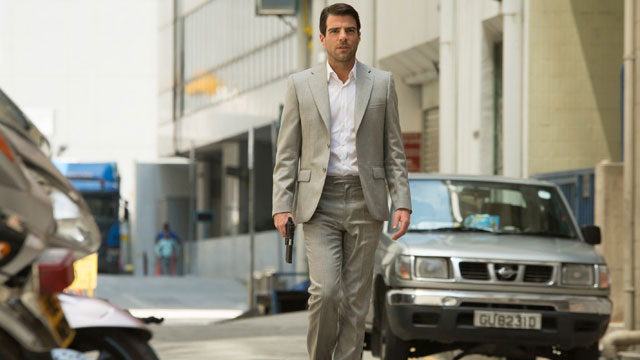 This is a very typical entry into the action-thriller genre – there are shadowy organizations who are creating or have created supersoldier assassins, and they’re all after the guy who knows how to make more, Dr. Litvenko (Ciaran Hines). But he’s been off grid for decades, so the only hope is to find his daughter, Katia (Hannah Ware). Both John Smith (Zachary Quinto) and Agent 47 (Rupert Friend) are after her, because she holds the key to many things and each one says he wants to protect and help her. But Agent 47 has an assignment, and a personal goal, and finding out if the two align or not gives the movie a little more depth. Does he want to protect and train Katia to help her, or is he actually her real enemy? 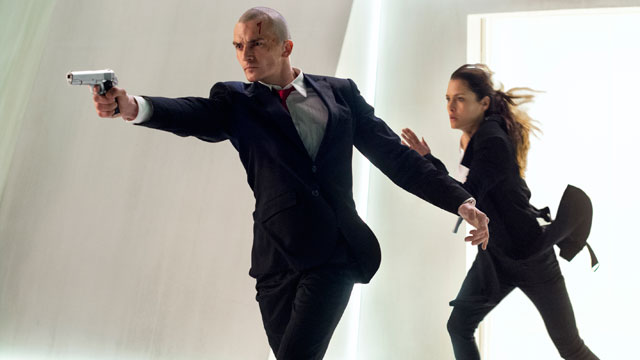 There are twists, there are turns, there are a hell of a lot of people dying in a variety of ways. There is literally no swearing or sex and no real nudity, but Hitman: Agent 47 earns its R rating due to a sky-high amount of violence (though nothing as much as, say, Kill Bill Vol. 1) and though we don’t see all the deaths as they happen, there’s a lot of blood and we do see it splatter. This IS based on a video game, after all.

It’s also a movie that quite frequently makes the case that intelligence is more important than brawn. Even if that message is shared with bucket loads of blood, it’s still nice to see. 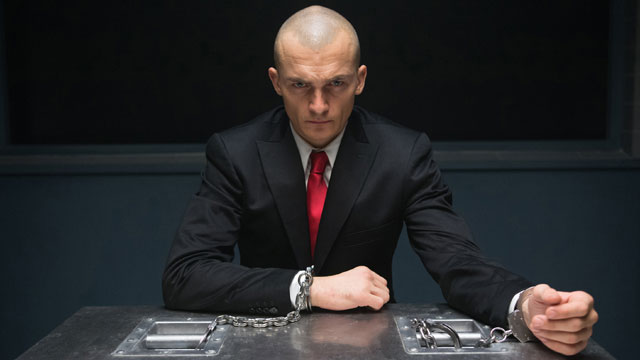 Rupert Friend looks like Orlando Bloom, and that’s not an insult. For someone whose entire job is to be a sleek, cold killer, he has the charisma to make you care about him. The cast is quite good, with a very pan-European and worldwide vibe that will probably help make this successful internationally.

I believe that we shouldn’t compare every movie to whatever is considered “the best”. This movie isn’t trying to be Citizen Kane. It’s honestly not trying to be Mission: Impossible, either. It’s aiming to be sleek, violent entertainment with a rather strong, positive moral, and in that it succeeds. And there’s nothing wrong with a movie aiming to be entertaining, visually stunning, and just hit its genre’s marks and tropes as hard and as accurately as possible.

If you’ve already seen Mission: Impossible – Rogue Nation and The Man from U.N.C.L.E. and you’re in the mood for another twisty globe-trotting action-thriller with exotic locations, some amazing stunts, a touch of humor, and lots of violence, Hitman: Agent 47 is your catnip. Or your guilty pleasure. That distinction is up to you.

Synopsis: HITMAN: AGENT 47 centers on an elite assassin who was genetically engineered from conception to be the perfect killing machine, and is known only by the last two digits on the barcode tattooed on the back of his neck. He is the culmination of decades of research – and forty-six earlier Agent clones — endowing him with unprecedented strength, speed, stamina and intelligence. His latest target is a mega-corporation that plans to unlock the secret of Agent 47’s past to create an army of killers whose powers surpass even his own. Teaming up with a young woman who may hold the secret to overcoming their powerful and clandestine enemies, 47 confronts stunning revelations about his own origins and squares off in an epic battle with his deadliest foe.

I believe that we shouldn’t compare every movie to whatever is considered “the best”. This movie isn’t trying to be Citizen Kane. It’s honestly not trying to be Mission: Impossible, either. It’s aiming to be sleek, violent entertainment with a rather strong, positive moral, and in that it succeeds. And there’s nothing wrong with a movie aiming to be entertaining, visually stunning, and just hit its genre’s marks and tropes as hard and as accurately as possible.