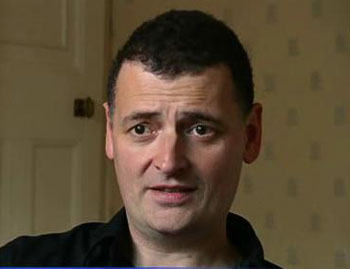 If there’s one writer for the new “Doctor Who” whose stories bear comparison to the late, great Robert Holmes, it’s Stephen Moffatt. He has written three memorable scripts for the new series and is set to write a two-part story for the series four, which will run on the BBC next spring.

But Moffatt is more than just a good writer for “Doctor Who.” And this weekend on BBC America, American fans can catch the first installment of his six-part mini-series “Jekyll.”

Moffatt was recently interviewed by The New Jersey Ledger about “Jekyll” and the rest of his writing career. He has written for a wide variety of genres in his career. He created and wrote every episode of the British version of “Coupling” and has written for “Doctor Who” and “Jekyll.”

When columnist Alan Sepiwall praised his writing on all three shows, Moffatt insisted, “just because ‘Coupling’ is typed, as it should be, as a sitcom. The fact is, there’s lots of humor in shows like ‘Buffy.’ There’s no reason Joss Whedon couldn’t sit down and bang out a sitcom; he absolutely could.”

“I think there’s a commonality between writing comedy and writing thriller-based, horror-based stuff. It’s about punchlines. Whether it’s a funny thing or a frightening thing or a surprise, you’re setting the audience up for a sucker punch.”

“Jekyll” is packed with sucker- punches, not least of which is that it takes place in a universe where Stevenson’s book and all the previous movies existed — and where the original work has many elements of truth. James Nesbitt (best known here for British imports like “Cold Feet” and “Murphy’s Law”) plays Tom Jackman, a scientist who begins suffering from blackouts that end with him covered in blood.

Through the wonders of camcorders, digital recorders and other surveillance equipment, he realizes that he’s transforming into a different person altogether, a man who looks vaguely like him but acts like a violent, super-strong child. When a private detective hands him a paperback copy of the original “Jekyll and Hyde” novella, Jackman snaps, “Yes, the comparison has occurred to me, but this is fiction!”

As for writing for the good Doctor, Moffatt said: “‘Doctor Who’ is a slightly homespun show because the monsters are always things you could see around you, and that’s more frightening for kids. The entire point of ‘Doctor Who’ is to frighten children.”

When asked about what he’s got planned next, Moffatt said he has a sequel for “Jekyll” ready should the BBC be interested. He also spoke about his career, joking, “The first two things I ever wrote, when I was a kid, 7 or 8, I tried writing my own ‘Doctor Who’ episodes and a stage adaptation of ‘Dr. Jekyll and Mr. Hyde.’ So I haven’t gone really far!”