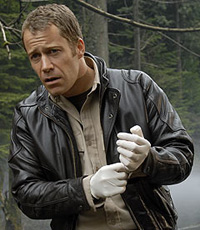 Movie Talk: On August 3rd “The Bourne Ultimatum” comes to the big screen and this one promises to be the biggest Bourne yet with Academy Award nominee David Strathairn joining the cast that includes the return of Joan Allen and Julia Stiles who has a lot more screen time than she got in the second film, 2004’s “The Bourne Supremacy.”

On August 10th you may, for the first time in your life, find out what it really means to be a child again and scared half out of your wits, because that is the day that a new horror film called “Skinwalkers” debuts on the big screen.

“Skinwalkers” is a horror action film that tells the tale of a 12-year-old boy who finds himself stuck right in the middle of a battle between two warring factions of werewolves: One pack of werewolves is sworn to protect him, while the other group wants him dead at any cost.

TV Talk: After the violent shootings that took place on the Virginia Tech campus earlier this year, Fox has decided to revise and reshoot some of the more graphic violent scenes that had been filmed for “The Sarah Connor Chronicles” before the tragic event had taken place.

The scenes that will be revised deal with the high school where John attends that comes under violent attack during a Terminator raid to kill the young Connor. Josh Friedman, the show’s executive producer, stated that due to the Virginia tragedy the scene would be revised but didn’t go into detail about what parts of it would undergo change.

Interview: This week, we talk with Colin Ferguson, who plays US Marshal Jack Carter in SCI FI Channel’s summer hit series “Eureka”. No episode spoilers here, but lots of fun. Colin tells us about the growing fan base for the show and for his character, some of the pitfalls Jack will have to navigate this season, and more.

And go check out the chance to win a home energy efficiency makeover, inspired by the Smart House!

In Nowhereland, Eddie Murphy is a financial executive for a major firm and finds himself on the downward spiral of a career meltdown. In the middle of this career crisis, he gets lost in his daughter’s make-believe world, which to his surprise is a place of calm and serenity where solutions to his real-world problems await him with lurid clarity. The only question that remains is can Murphy escape the imagined and learn to live with the same contentment and assurance in the real?

Roger Corman’s classic has been simply retitled Death Race for this remake, and features Jason Statham (“Transporter 2,” “Snatch”, “Crank”), and is being directed by Paul W.S. Anderson. Anderson (“Resident Evil: Apocalypse”) will also be helming The Rock’s “Spy Hunter” and has written the screenplays for the upcoming “Resident Evil: Extinction” and “Castlevania.”