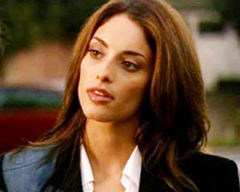 Raised in Vancouver, British Columbia, Erica was a child actress appearing mainly in commercials before taking a break during her teenage years to concentrate on her school work. Eventually she restarted her career in show business, first on the stage, then with roles in television shows like “Special Unit 2,” “Jake 2.0,” “Smallville,” “Dead Like Me” and “Blade: Trinity.” More recently she has appeared in several episodes of “The L Word,” “Battlestar Galactica” and The CW’s “Reaper.”

Our Slice of SciFi reporter Linda Craddock was able to catch up with Erica on the busy and noisy set of “Eureka” to talk with her between takes during the shooting for the second half of season three. Erica took a few minutes to share some things fans can expect from the third season when it returns after a short hiatus. Linda’s big question to Erica was — Will there be a season four? We think you might like her answer.

Sit back and enjoy this interview with the lovely Erica Cerra.