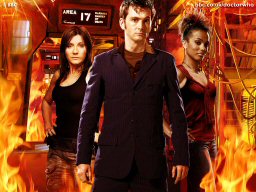 Stories in which the events that happen on-screen take the same amount of time as the audience spends invested in the film or television program are nothing new. It happened in the classic “High Noon” (the original, not any of the substandard remakes) and viewers can see it unfolding each week on the hit series “24.”

But to have a story unfold in “real time” is something new and different for “Doctor Who” and something that couldn’t have effectively happened in the original series. Building to a cliffhanger every 24 or so minutes wouldn’t have allowed the “real time” concept to work quite as effectively as it does here.

So, it’s interesting that even though the central hook of “42” is something that could only happen on the new series, the episode itself would be firmly grounded in the conventions of the classic series. And that this hybrid of new and old would make for one of the most effective and entertaining stories of series three and David Tennant’s run as the Doctor.

The Doctor and Martha arrive on a space-ship in the near-future. The ship is crashing into a near-by star and has 42 minutes before the they plummet into the system’s sun and perish. The Doctor figures he can load everyone into the TARDIS and they can escape–except the TARDIS is cut-off by the heat overload.

To make things worse, a mysterious force is possessing members of the crew and burning those who come into contact with it to death.

The concept of having the Doctor separated from the TARDIS and forced into taking part in the events unfolding on screen is something that harkens all the way back to the early days of the classic show. There were many stories that involved the central dilemma of finding a way back to the TARDIS or being separate from the time machine.

But the new hook is the “real time” concept being used for the story. It heightens the suspense of the story and drives the narrative forward, giving us a ticking time clock that the Doctor and the crew of the spaceship must beat or meet their utltimate demise.

Along the way, there are some really great scenes from a character standpoint, including Martha’s being trapped in a life support pod and jettisoned off the ship, Martha’s calling home to her mother to say goodbye and the Doctor becoming possessed by the sun. Not to sound repititive here, but David Tennant really delivers again this week as the Doctor. He’s still got the energy of series two, but he’s more controlled and less manic about it–and it shows in his performance. The scenes where the Doctor desparately tries to save Martha and then becomes possessed by the alien intelligence are some of the best work he’s done on the show.

And, for the most part, the supporting cast do a good job as well. A lot of them are there as canon fodder for the possessed humans to kill off, but the few that do get some screen time come off well. The only exception is Michelle Collins as the ship’s captain. It’s hard to believe she’s a tough as nails as the script would like us to believe.

And I’d be remiss in pointing out that, for the most part, this is essentially the same concept we saw last year in “The Impossible Planet/The Satan Pit” two-parter. But despite being a bit derivative, the story is still entertaining, exciting, well acted and the visuals are stunning.

All that and I haven’t even addressed the phone calls from Martha to her mother. It seems that following the events of “The Lazarus Experiment” Matha’s mother has been pursuaded by Mr. Saxon’s aid to assist them. They listen in on the conversations between Martha and her mother…but for what purpose, we’re not quite sure yet. After last year’s being hit over the head by a two-by-four lack of subtelty with “Torchwood,” it’s nice to see the show can drop hints and have a season-long arc that doesn’t feel forced.

So, after a two-week hiatus, “Doctor Who” returns with a sold, well done hybrid of the new and the old. A good step and it certainly has me excited for next week’s installment–the long-awaited small screen adaptation of the classic New Adventure, “Human Nature.”