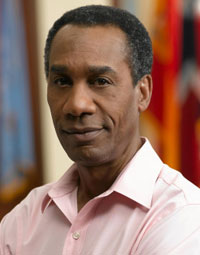 Movie Talk: This week, we take a look at two new films with interesting concepts. The first is the Justin Chatwin vehicle called “The Invisible” and the other is Nicolas Cage’s new feature,”Next.” Both will be released on Friday, April 27, 2007.

The new DVD “Dark Corners” will hit store shelves on May 22, 2007 and it tells the story of a young woman whose life becomes a nightmarish place where the line between her idyllic suburban family life and her terrifying subconscious world becomes very blurred. It stars “American Beauty” actress Thora Birch in one of her most riveting roles to date.

TV Talk:
Electronic Arts and Endomel of Europe have teamed up to bring the television viewing audience and gaming community together in such a way that may forever change the way we interact electronically. The new technology called “Virtual Me” becomes a reality this summer.

Interview: Acclaimed actor and sometime director Joe Morton joins us to talk about the upcoming season of EUREKA on SciFi Channel. He talks with Mike, Evo and Brian about his role as Henry on the show, as well as his love of directing stage plays, his work mentoring high school students, and his dream to someday direct a stage presentation of Ralph Ellison’s “The Invisible Man”.