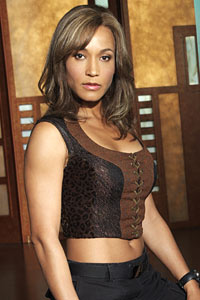 CONTEST WINNERS! Congratulations to the three winners of “The Last Mimzy” contest — Barry from Athens, Brigitte from Huntington Beach, and James from Calgary.

Slice of Trivia: Doug Kress is in studio, and gives us a live trivia test!

TV Talk: “Painkiller Jane”, the series based on the SciFi Original movie from 2006, premieres on the SCI FI Channel in the U.S. on Friday, April 13, 2007. Starring Kristanna Loken as Jane Vasco, the series is based on the comic-book series of the same name created by Jimmy Palmiotti and Joe Quesada.

Interview: Rachel Luttrell (“Teyla Emmagan”, Stargate: Atlantis) joins the crew for a festive interview about her life after joining a high-profile fan franchise. Her expectations for a short run have morphed into a great appreciation of how far and wide the fans are located, and how dedicated to the show they are.

She also tells us about life on the set as a woman who regularly kicks ass and takes names, and the fun of being on a longer running show with a strong fan following.

Future Talk: 300 director Zack Snyder’s next project may be an old story of his, Army of the Dead. It’s a zombie film set in the not-too-distant future where the city of Las Vegas has been turned into a quarantined area full of zombies. The story centers on a father who is trying to find an escape route out of Vegas in order to save his little daughter from the undead flesh eaters.