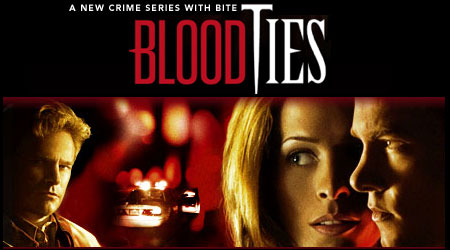 Sometimes, I find the darndest shows in the darndest places. Who knew that Lifetime had created “Blood Ties”?

It’s a new TV series based on Tanya Huff’s “Blood” series of novels, featuring Vicki Nelson, a former Toronto cop turned PI, and her ride into the realm of the supernatural when Henry Fitzroy, a 450-year-old vampire, teams up with her to stop a killer who’s summoned a demon that’s wreaking havoc on the city.

Starring Christina Cox and Kyle Schmid, the pilot airs (aired?) tonight, March 11, and will continue as a weekly series, airing Sunday nights at 10pm. The pilot is scheduled to rerun later tonight, and the first hour of the pilot movie is also available as a free download at iTunes.

I enjoyed these books when I first read them years ago, and I think it’s cool that it’s now a TV series, and that pretty soon we’ll be seeing Charlaine Harris’ Southern Vampire series on HBO as a new Alan Ball production.

Can we ever have too many vampires on TV at the same time? I’m willing to find out.