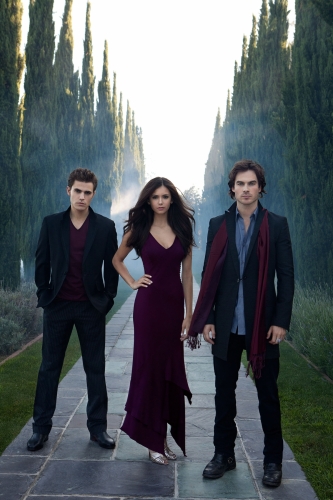 While it’s not reinventing the wheel, the series does show promise thanks to the talents of Ian Somerhalder and Kevin Williamson.

It would be easy to dismiss the CW’s latest supernatural teen angst series, “The Vampire Diaries” as just another network attempt to cash in on vampire-mania.  Certainly sexy vampires and star crossed relationships between the bloodsuckers and mere mortals have been gold at both the bookstore and the box-office thanks to Stephenie Meyer and the “Twilight” saga.

So you can’t really blame the CW for jumping on the band wagon.

But at least by jumping in the band wagon, they’ve pulled in a solid premise from a series of best-selling novels by author L.J. Smith and they’ve got the creative influence of “Dawson’s Creek” creator and the master of teen angst, Kevin Williamson.

Following the death of her parents, Elena withdrew from her world,  broke up with her boyfriend and began keeping a diary of events.  Months later, she and her brother are ready to go back to high school and try to pick up the pieces of their lives to begin moving forward.   She meets new comer Stefan, a dark and mysterious guy who harbors a secret–he’s a vampire.  A series of killing are taking place around town and it looks like Stefan may be losing control of his vampire side (he lives by feeding on squirrels, rats, etc.)  And, of course, he’s got some kind of mysterious fascination and attraction to Elena, much to the chagrin of her ex-boyfriend and several of the other girls in town.

The pilot episode borrows heavily from the early years of the “Buffy” mythology and there are echoes of the Buffy and Angel relationships throughout the episode.  There’s also a lot of set-up and putting things into play that will play out in the long term arcs of the season and series.

The pilot works hard, featuring a lot of the elements that made Williamson’s “Creek” so successful early on–quirky dialogue, smart teenagers and the right amount of angst.   “The Vampire Diaries” isn’t reinventing the wheel, but at least what we see unfolding is interesting enough to keep your interest and maybe hook you enough in the long term plots to come back for more.

The tension between the two leads is well done, but it’s actor Ian Somerhalder (from “Lost”) who will hold your attention when he eventually shows up in the show.  Somerhalder provides a fascinating, magnetic potential antagonist for the show and helps breath some much needed life into the pilot about half way through the episode.

Whether or not “Vampire Diaries” works it way into your regular viewing habits will depend on how much rope you’re willing to give the show.  It may be worth a chance just because of Somerhalder and Williamson.