Godzilla vs. Kong is a movie that requires no summary when it comes to niceties like plot and narrative. The only real questions are does it deliver on the monster fights and does it let the story get in the way of the action, and the answers happily are yes to the former and no to the latter. With that out of the way, it should also be stated that the film actually does a pretty good job balancing character/story building scenes with the fight sequences so that the action doesn’t completely overwhelm the movie as one might expect with a Transformers sequel. The viewer is left to walk away from this experience feeling triumphant and invigorated, rather than clobbered and exhausted.

The story, such as it is, involves a group of scientists being hired to venture into the Hollow Earth (think Jules Verne’s Journey to the Center of the Earth) in search of a power source sought after by a corporation that has developed specialized crafts built to withstand the “reverse gravitational field” that has doomed previous expeditions.
The guide used for this journey is none other than Kong himself. At the same time Madison (Millie Bobby Brown’s character from Godzilla: King of Monsters) and a couple of her friends go on a quest to discover what may have caused Godzilla to attack Pensacola, Florida seemingly unprovoked. All of this provides a rough framework for what the movie really sets out to achieve, and that’s lots of sequences of monster smashing. 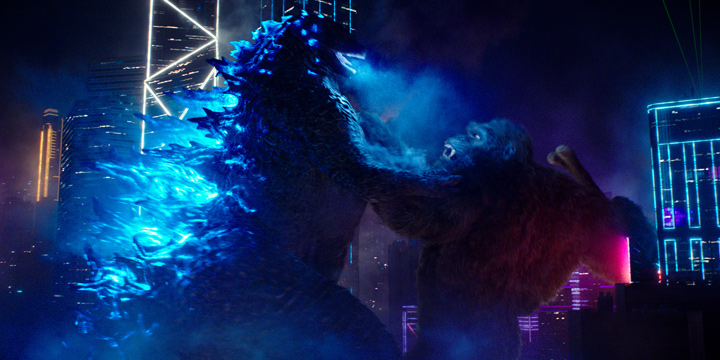 Watching Godzilla vs. Kong took me back to watching old Godzilla movies on Saturday mornings as a child. The exposition and characters would often get in the way of what I was really there to see, which was the magic of guys in rubber suits wrestling one another and knocking down toy buildings. Godzilla vs. Kong appears to have been made by someone who gets it, someone who is making a movie aimed at that 10-year-old kid who knows what it is they’ve come to see. The end result is ludicrous and dumb, with preposterous plot devices and action sequences that strain credulity, but for the most part it works so long as the audience is willing to turn their brains off and go with it. I did find King Kong wielding an axe to be a bit much (he’s the freaking king of beasts, what’s he doing using tools like a human!?!?) but the battle sequences were otherwise effective and the advertised final showdown with Godzilla proved to be altogether satisfactory.

In total, Godzilla vs Kong is a ridiculous but fun popcorn movie that delivers on its premise. Arthouse cinema lovers may want to look elsewhere, but B-movie fans, 10-year-olds, and adults looking to channel their inner 10-year-old will find much to enjoy.

Legends collide in “Godzilla vs. Kong” as these mythic adversaries meet in a spectacular battle for the ages, with the fate of the world hanging in the balance. Kong and his protectors undertake a perilous journey to find his true home, and with them is Jia, a young orphaned girl with whom he has formed a unique and powerful bond. But they unexpectedly find themselves in the path of an enraged Godzilla, cutting a swath of destruction across the globe. The epic clash between the two titans—instigated by unseen forces—is only the beginning of the mystery that lies deep within the core of the Earth.

"Godzilla vs Kong" and the necessary fun of monster movies

In total, Godzilla vs Kong is a ridiculous but fun popcorn movie that delivers on its premise. Arthouse cinema lovers may want to look elsewhere, but B-movie fans, 10-year-olds, and adults looking to channel their inner 10-year-old will find much to enjoy.