Art forgery intersects with the Nazis in The Last Vermeer, a fascinating fictional take on a real-life story. The film features a tour-de-force performance by Guy Pearce. While it takes liberties with history, it nevertheless brings an awareness of an amazing historical con artist to audiences.

The movie begins in Austrian salt mines where Herman Goring hid his collection of art works. One of the works uncovered is Vermeer’s “Christ and the Adulteress.”

Next we come to the post-World-War-II Netherlands. Although there is an operating Dutch government, things are being run by an Allied Force.

A man is tied to a post and summarily executed for collaboration with the Nazis. The event is witnessed by Captain Joseph Piller (Claes Bang), a Dutch citizen working for the Allied Forces.

He heads to an art museum to where the Vermeer has been placed. Joseph is in charge of finding out who sold artworks to the Nazis and finding the original owners of each piece.
The Vermeer was found with a letter saved by Goring. It implicates a current member of the Dutch government. After being intimidated by Joseph and Dekker (Roland Moller), Joseph’s assistant who worked with him in the Dutch resistance, the official gives them the name of Han van Meegeren (Guy Pearce).

Joseph and Dekker go to van Meegeren’s rather palatial home. Since he refuses to answer their questions about who facilitated the sale of the Vermeer, Han is taken into custody and put in a cell.

One day while Joseph is leaving the prison, he encounters a group of men led by Alex de Klerks (August Diehl, who was so good in Terrence Malick’s “The Hidden Life”). They are from the Dutch Ministry of Justice and have a warrant to take Han into their custody. Since Joseph has experienced their past seizures of suspects, he sneaks around them to smuggle Han out of the prison and into a loft above the art museum. The Dutch have no jurisdiction there and so cannot touch Han.

Now that Han is safe, he is given painting materials in exchange for giving Joseph a name, Theo van Wijngaarden, an art dealer. Joseph goes to Rotterdam to try to find out more about van Wijngaarden but comes back empty-handed.

Joseph is decommissioned. His former art museum assistant, Minna (Vicki Krieps) shows him Han’s drawings which prove to Joseph that Han forged not only “Christ and the Adulteress” but also other Vermeers.

When the Allied Forces start to relinquish power to the Dutch, they seize Han to put him on trial for collaboration. Joseph decides to defend Han with the assistance of a retired lawyer, Bernard Bakker (Karl Johnson). Han’s argument that he swindled the Nazis by selling them forgeries becomes his defense to the astonishment of court goers.

The film is superb in creating the subterfuge that it is going to be about tracking down Nazi collaborators in the Dutch art world. Seeing Han’s high standard of living while the Nazis ruled makes him a likely suspect. But then the story shifts to the real heart of the matter, which is that Han incredibly forged not just one Vermeer, but multiple Vermeers.

A major theme which the movie explores is what people will do to survive when under occupation by an enemy. Han, even if he swindled the Nazis, obviously benefited and was able to throw lavish parties. The picture adds a final scene which also raises the question about Han’s relationship with the Nazis.

Another front where this theme is explored is in Joseph’s family life. During the war, he left his family because he would endanger them by being Jewish. His wife, to support herself and her son, did clerical work for Nazis. She then passed information to the Dutch resistance. It is implied that she did sexual favors to gain access to this information.

When Joseph uncovers photos of her and a German at one of Han’s party, he cannot deal with her behavior during the war. Was her choice collaboration? Was her behavior ethically justified?

One particular question which the film raises is does the revelation that the Vermeer paintings are forgeries diminish their value? At one point, Han states in court that the world is only improved by the presence of more Vermeers. His forgeries were remarkable. While we presume that art forgery is a bad thing, here we have the creation of supposedly new works by Vermeer that art critics were convinced were as good as Vermeer’s actual paintings. Is it indeed better to have more Vermeers for people to admire? 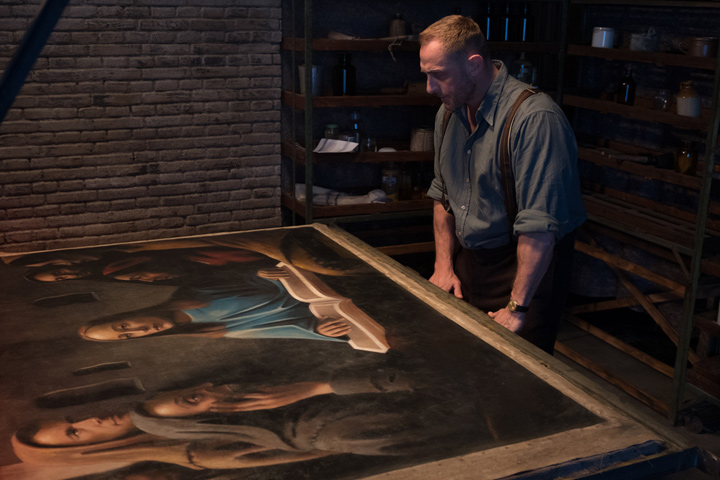 I also appreciated the technical explanations for how the forgeries were carried out. They indicate a degree of brilliance on the part of those involved in the forgeries that begs a question Joseph asks Han at one point: if you are so great at creating Vermeers, why would not your own art be great? And why would you not pursue your own work?

Upon further research on this interesting story, it becomes clear that the filmmakers took historical liberties in certain ways. This is particularly so at the trial’s conclusion. But I do not expect movies based on historical events to be documentaries. I rather regard them as jumping-off points for more investigation.

The picture in general is stalled by the family story of Joseph and his wife Leez (Marie Bach Hansen). She, as with all of the female characters in this film, is a bit part. For all the angst of their separation, we are not given enough glimpses of their family life to make us either care or to justify the story’s inclusion in this almost two-hour movie.
Guy Pearce’s performance as Han is remarkable. He adds so many nuances to the character, who clearly was a complex person. The most charming aspect of Pearce’s portrayal is how unapologetic he is for his excesses and decisions. This is a role that could easily have gone over-the-top, so Pearce’s restraint in that respect is appreciated.

Claes Bang gets the most screen time. I found his acting, so wonderful in the Swedish movie “The Square,” to be only adequate here.

Despite its length and some quibbles, this is a story worth knowing. Guy Pearce’s performance is a must-see.

While Joseph Piller (Bang), a Dutch Jew, was fighting in the Resistance during the Second World War, the witty, debonair aesthete, Han van Meegeren (Pearce) was hosting hedonistic soire?es and selling Dutch art treasures to Hermann Goring and other top Nazis.

Following the war, Piller becomes an investigator assigned the task of identifying and redistributing stolen art, resulting in the flamboyant van Meegeren being accused of collaboration — a crime punishable by death. But, despite mounting evidence, Piller, with the aid of his assistant (Krieps), becomes increasingly convinced of Han’s innocence and finds himself in the unlikely position of fighting to save his life.

"The Last Vermeer" tells the story of a long con

Upon further research on this interesting story, it becomes clear that the filmmakers took historical liberties in certain ways. This is particularly so at the trial’s conclusion. But I do not expect movies based on historical events to be documentaries. I rather regard them as jumping-off points for more investigation.