“Les Miserables” is a powerful film that slowly builds to its astounding climax. It shared the Jury Prize at Cannes in 2019. When I first heard the title of this movie, France’s official entry for the Oscar for International Feature Film and now a nominee in that category, I thought “not another remake of Hugo’s classic novel.”

Then I saw the trailer, which I will admit underwhelmed me. While it was clear that this was not another version of Hugo’s book, it seemed to be solely about over-the-top police brutality and attempts to avoid accountability. Certainly this is a timely and relevant topic, but the trailer did not make the picture seem to stand out in any way from the crowd of similar films on this subject.

The film begins with the residents of a local neighborhood making their way via mass transit to a public viewing of the FIFA World Cup men’s soccer championship in 2018. For those who follow this sport, France defeated Croatia for the title. The sense of ebullience and community that results are evident. This becomes a sharp contrast to what later transpires.

The rest of the film takes place over two days in the Paris suburb of Montfermeil. We soon encounter three members of a police team. The clear leader of the group is Chris (Alexis Manenti), who is a bully used to getting his way on the streets. His partner, Gwada (Djibril Zonga) goes along but seems mellower.

Stephane (Damien Bonnard) has transferred from Cherbourg to Paris to be near his son since his divorced wife has moved to the capital. He is introduced to the other two and becomes part of their team. (I was surprised by the idea of a three-person police team.)

Stephane is more by-the-book than the other two. But he tries to fit in and goes through some token initiation. Still he is challenged when Chris goes up to some girls and starts to hassle them for no good reason. Chris pretends to look for drugs so that he can grope one of the girls.

We are steadily introduced to the groups in the area. The Muslim Brotherhood, led by Salah (Almamy Kanoute), is trying to help the local kids stay straight and avoid trouble. The “Mayor” (Steve Tientcheu) holds court at a local bazaar. When there are problems, Chris negotiates and argues with these various elements.

A problem arises when Zorro (Raymond Lopez) arrives with his entourage from the local circus to confront the Mayor about a stolen lion cub. Chris and company arrive in time to intervene before major violence breaks out.

A local boy, Issa (Issa Perica), has stolen the baby animal. Eventually the police recover the cub and then hunt down Issa. When they find him and take him into custody, they are confronted by his rock-throwing friends. A flash-gun is discharged by Gwada and accidentally hits Issa straight in the eye.

A drone overhead, operated by Buzz (Al-Hassan Ly), has captured video footage of the incident. Chris in particular is desperate to get the drone to destroy the evidence. The subsequent negotiations on the sly to obtain the damning technology and Issa’s treatment after he is injured lead up to the circumstances that end the film.

The movie does include quotes from Hugo’s work, and it is clear that the central question of what constitutes justice is at the core of the picture. Like the novel, it uses the small details to build the story in a calculated way.

Patience is required to see where these scenes of everyday life will lead. This is the type of movie where you wonder where the story is going but in retrospect each scene is part of the larger whole. At first what seems extraneous later becomes relevant.

In fact, the screenplay can only be described as brilliant for its conciseness while providing ample details of the quotidian injustices suffered by the characters in the film. It ends up being a devastating social commentary and not just a police or crime drama. This is what could not be captured in the trailer.

The subcultures and leaders of these groups are subtly portrayed. While each is separate, their interactions provide telling evidence of the fragile balance that keeps society together.

I will admit to being a little concerned every time I see a foreign-language movie and have to rely on subtitles to know what is going on. Am I missing something important that the translator felt was irrelevant to include? But in this picture, it is not difficult to feel the palpable tensions that would arise in moments of crisis. It is an emotionally violent work as much as it is a physically violent one.

The costumes and production design are well-crafted. It was interesting to see the casual way in which the police dressed. I am not certain if that is the case in real life, but it gave the customer designer some leeway in using clothing to depict the traits of the officers.

Likewise, the cinematography is first-rate. The action sequences are tight and focused. The framing of the shots is also superb. 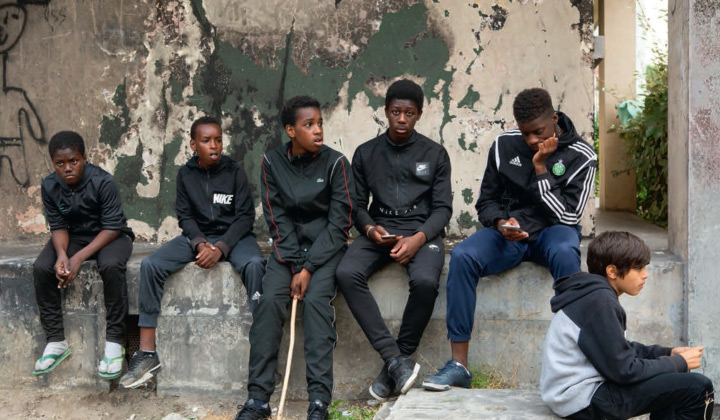 The child actors in this movie give entirely naturalistic performances. Issa Perica is so moving across a wide range of emotions. These are not the precocious children of American sitcoms but kids who endure a hard life, yet take joy in simple pleasures.

This film is not meant to be a showcase for the adults acting in it. Yet each member of the police team steps up and does excellent work embodying their character’s quirks and personalities. There are some particularly moving scenes, such as between Gwada and his mother, and Gwada and Stephane.

As to the finale, which I cannot reveal here, it is both inevitable and unexpected at the same time. It is utterly organic to everything that happened before. The audience is left with much to think about as they depart the theater.

It is interesting that this picture is competing against the equally compelling “Parasite” at the Oscars for International Feature Film. Both share a plot that builds over time and have unanticipated endings.

This is a movie not to be missed. It is worth the investment of time and money.

Four and a half out of five stars

Inspired by the 2005 riots in Paris, LES MISÉRABLES – directed by Ladj Ly – follows Stéphane (Damien Bonnard), a recent transplant to the impoverished suburb of Montfermeil, as he joins the local anti-crime squad. Working alongside his unscrupulous colleagues Chris (Alexis Manenti) and Gwada (Djebril Zonga), Stéphane struggles to maintain order amidst the mounting tensions between local gangs. When an arrest turns unexpectedly violent, the three officers must reckon with the aftermath and keep the neighborhood from spiraling out of control.

I will admit to being a little concerned every time I see a foreign-language movie and have to rely on subtitles to know what is going on. Am I missing something important that the translator felt was irrelevant to include? But in this picture, it is not difficult to feel the palpable tensions that would arise in moments of crisis. It is an emotionally violent work as much as it is a physically violent one.

This is a movie not to be missed. It is worth the investment of time and money.