Imagine a red dress, promoted for sale as a couture solution to doubts about your wavering self-esteem, your unsatisfactory sex life, and so much more that’s gone wrong with your life. Watch as elements of your life shift towards the seeming positive as the allure around you from wearing that dress feeds your ego, your alter-ego, and a few deeper needs you don’t like to speak of aloud.

But what if that dress needs more from you than you need from it? Is it feeding you, or feeding off of you? What happens next, when the dress can’t satisfy you anymore, or you can’t satisfy it?

In Fabric is a fever-dream montage of vignettes, connected by how a haunted (or cursed?) red dress impacts the lives of the downtrodden souls who happen across it and dare to wear it. There’s a mystery about how the dress is “activated” when it comes across a new owner, but that is the least of the myriad of questions left unanswered by the end… and in this case, those unresolved questions don’t matter too much. The shadows of the haunted wearers linger on, beyond the end of the movie, tied off in a curiously affected way.

Sheila comes across the dress first, a lonely woman who’s been abandoned by her husband, is taken for granted by her college-bound son Vince, and is despised by Vince’s girlfriend Gwen. After being subtly manipulated into buying the dress by the very odd Ms Luckmore at the department store Dentley and Soper’s, she goes on several dates wearing it. However good it makes her feel, after several strange occurrences where the dress should have been damaged but reappears in her life fully intact, Sheila decides to donate it to a charity shop. One can infer that the dress does not take rejection well, and takes matters into its own threads.

Washing machine repairman Reg and his fiancee Babs acquire the dress next, with Reg being made to wear it during the debauchery of his bachelor party, and Babs trying it on the net day while Reg recovers from a night with dangerous levels of alcohol. She marvels at how it could possibly have fit the both of them so flatteringly given the more than noticeable difference in their sizes, but Reg dismisses her concerns out of hand.

Ultimately, the dress needs to feed it’s own hungers, and both Reg and Babs, and even the department store seem to suffer, while the dress continues on. In new forms or more copies of the same form is an open question. 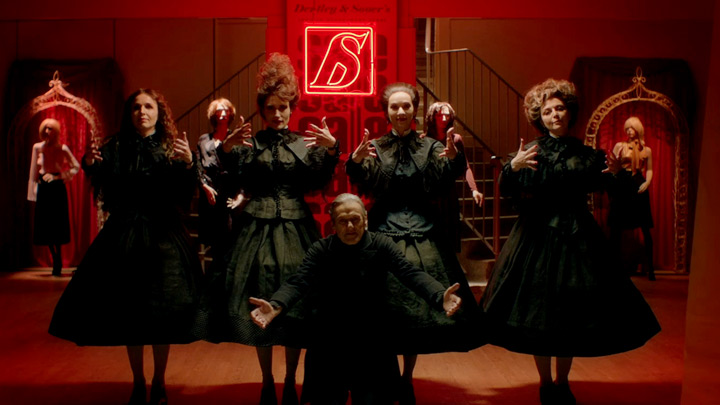 The dress’ connection to the store Sheila purchased it from, and the oddly too-personal interest her bosses Stash and Clive have about her life (we see them later with Reg in an equally strange interview) all add to the questions about whether this is normal behavior, or something influenced by the dress, or if there’s something else going on.

The undercurrent of unexamined aberrant behavior is equally inscrutable… is the dress heightening emotions and dark desires for it’s own ends, or is there another as-yet-unseen element in play?

The staff at the department store Dentley and Soper’s are crucial to the behavior of the dress, but even at the end, we’re not sure what that connection serves. We do know that the dress, like evil, never dies. It just returns in a shiny new form to distract you from it’s true intentions until it’s too late.

The one drawback of the film is it seems overlong; some of the explorations of the fetishes indulged in by the employees of the fashion store don’t directly connect to the dress nor explain why they are tied to so much death and mayhem because of the dress.

But there is an appeal to the 70s stylings and almost noir compositions of scenes and shots, and the use of music to intentionally make the viewer feel uncomfortable during all the right sequences is commendable.

This one is definitely won’t appeal to a broad audience, but it already has a large fan contingent and could easily dominate its niche.

A lonely woman (Marianne Jean-Baptiste), recently separated from her husband, visits a bewitching London department store in search of a dress that will transform her life. She’s fitted with a perfectly flattering, artery-red gown—which, in time, will come to unleash a malevolent curse and unstoppable evil, threatening everyone who comes into its path.

In Fabric is a fever-dream montage story about how a haunted (or cursed?) red dress impacts the lives of the downtrodden souls who happen across it and dare to wear it. There’s a mystery about how the dress is “activated” when it comes across a new owner, but that is the least of the myriad of questions left unanswered by the end… and in this case, those unresolved questions don’t matter too much. The shadows of the haunted wearers linger on, beyond the end of the movie, tied off in a curiously affected way.

The Creative Drive Behind "Volition"
Jim Ojala: Mysteries and Horror in "Strange Nature"
"Prodigy" Engages in a Suspenseful Battle of Wills
Indie Horror: "The Friendship Game"