A change of focus makes the new animated version of “The Addams Family” worth watching for those who are fans of its various incarnations, dating back to Charles Addams’ print work. The film has witty dialogue and interesting depictions of the characters and house, even if its message is timeworn.

The wedding of Gomez (Oscar Isaac) and Morticia (Charlize Theron) in Europe starts the movie. While this is going on, the various townsfolk arm themselves with the proverbial torches and pitchforks to demand that the Addams clan leave town. 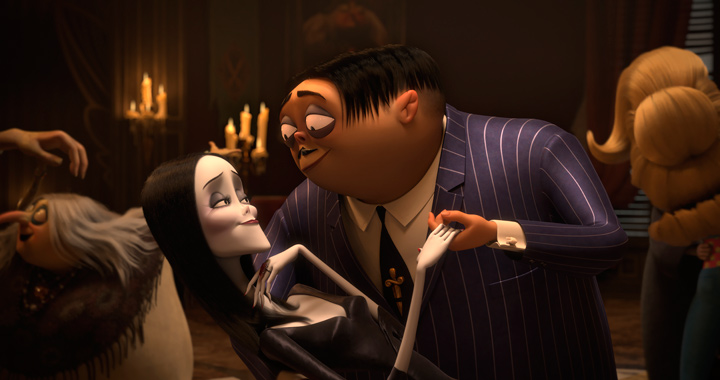 On their quest for a new home, which they hope will be truly awful and corrupt, they end up in New Jersey, one of many commentaries scattered throughout the picture. They run over Lurch (Conrad Vernon), who is in a straitjacket from the abandoned asylum on the hill. This becomes the Addams family’s new home. It is perpetually shrouded in fog, which helps to keep intruders away.

In a major shift, the film jumps forward 13 years. Morticia and Gomez now have two children, Wednesday (Chloe Grace Moretz) and Pugsley (Finn Wolfhard). Wednesday is bored because she is not allowed to leave the house and go travel.

Pugsley is facing an Addams family ritual, dancing a mazurka with a saber, that will prove that he is a man. Pugsley, however, is more interested in experimenting with explosives, so he has neglected his saber training. Gomez worries that he will fail and be an embarrassment at his ceremony, to which all of the various relatives of Morticia and Gomez have been invited.

Meanwhile, down below in the valley, there is a new development named “Assimilation,” populated by people who all want to be alike. The concept is the brainchild of Margaux Needler (Alison Janney), a multi-hyphenate interior designer, pop culture icon, reality TV star, and real-estate agent. Her show is leading up to a grand finale where viewers can buy their own home in Assimilation.

An accident causes the fog to lift from the Addams Family mansion. Its sudden visibility from the town below causes Margaux to freak out. The Addams decide that they should visit the town and of course startle the townsfolk, especially with their pet lion Kitty. Margaux invites herself to do a makeover of the Addams Family home.

She is ultimately rebuffed in her efforts to beautify the home. From her secret control center in her home, she manipulates the online members of the website NeighborhoodPeeps, another wonderful piece of satire, into believing that the Addams are a threat to the community. 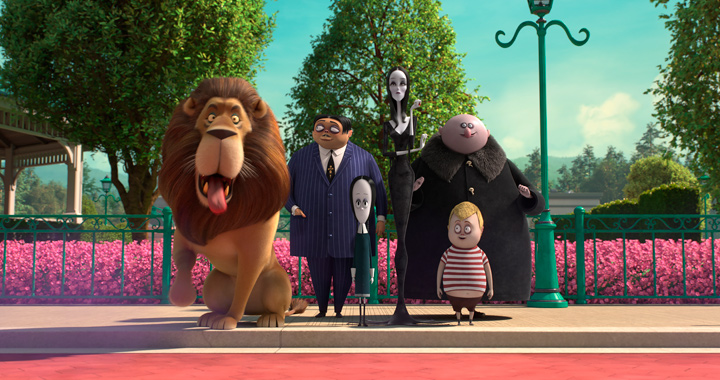 Meanwhile, the various family members arrive for Pugsley’s ceremony. In an interesting twist, this version did not have Uncle Fester (Nick Kroll) and Grandmama (Bette Midler) already resident in the house. Neither was cousin Itt (Snoop Dogg).

To say that I was not enthralled by another remake of the Addams Family would have been an understatement. I have enjoyed most of them, but admit to having a bias growing up watching the original television show as a child. For me, those characters were the archetypes of all future Addams incarnations. I particularly enjoy watching “Adult Wednesday Addams,” which is an absolutely hysterical take on the character.

Animation, however, does permit an homage to the original illustrations of Charles Addams himself. On that score, the movie succeeds. At first, I found the animation style a little off-putting, but it grew on me as I watched the picture.

The film does a wonderful job portraying the nuances of the Addams estate, both outside and inside. Not limited by real-life boundaries, the animators are able to give full license to their imaginations. It is so well-done that it reinforces the monotony of every scene at the school or in Assimilation.

The dialogue is quite good. Sometimes it is laugh-out-loud funny. The deadpan delivery of these remarks by the characters heightens the humor.

The two most notable voice actors are Moretz as Wednesday and Janney as Margaux. Moretz gets the tone of Wednesday pitch-perfect in her delivery. Janney is so over-the-top that it provides its own form of satire.

The plot has some ingenious twists and is well-paced. I never was bored. The story’s message, however, which revolves around being different versus being the same is as old as the hills. In some ways, the Addams Family by their obvious difference lend themselves to this kind of theme. In this case, the message was predictable but well-executed.

The movie is rated PG, for “macabre and suggestive humor, and some action,” which somewhat surprised me. I am not sure that I consider “macabre humor” to be PG-worthy. But if you go to an Addams Family movie, I would think that you would expect such humor from the get-go. I do not recall hearing any obscenities. There are a few references to some quirky habits of Assimilation citizens, hence the “suggestive humor”.

I personally did not think that it was too scary for children. But I would suggest that very young children might be bored by the plot, especially the digression into Assimilation.

So this ended up being a well-made remake of the series. If you want to have a fun time, go and see this movie.

Three and a half out of 5 stars.

The first family of Halloween, the Addams Family, is back on the big screen in the first animated comedy about the kookiest family on the block. Funny, outlandish, and completely iconic, the Addams Family redefines what it means to be a good neighbor.

Directors: Conrad Vernon and Greg Tiernan
Based On: Characters Created by Charles Addams

To say that I was not enthralled by another remake of the Addams Family would have been an understatement. I have enjoyed most of them, but admit to having a bias growing up watching the original television show as a child. For me, those characters were the archetypes of all future Addams incarnations. I particularly enjoy watching “Adult Wednesday Addams,” which is an absolutely hysterical take on the character.

So this ended up being a well-made remake of the series. If you want to have a fun time, go and see this movie.