The Secret Life of Pets 2 has some very funny, laugh-out-loud moments and clever animation of new animal characters that will make it a hit with families. The movie, however, is characterized by lazy storytelling and an avoidance of issues which it presents.

I thoroughly enjoyed the first installment in the Secret Life of Pets series. Rather than just being a riff on the trailers which showed pets cavorting when their human guardians left, it took on the issue of animal abandonment.

This did not come without a downside for the filmmakers. Some parents who brought their children to see a movie based on the trailers felt that they were misled and were left unprepared to explain to their kids that people do desert their pets and that this is a real-life problem. So this makes the avoidance of addressing issues in the sequel more notable than it would otherwise be.

The plot involves a patchwork of 3 stories involving characters from the first picture. These all intersect by the end of the film. The primary one involves Max the Jack Russell terrier. His guardian Katie meets a man and they have a child, Liam. While the other dog Duke, a Newfoundland, is mellow around the child as he matures, Max becomes highly neurotic as he tries to protect Liam from every possible risk. 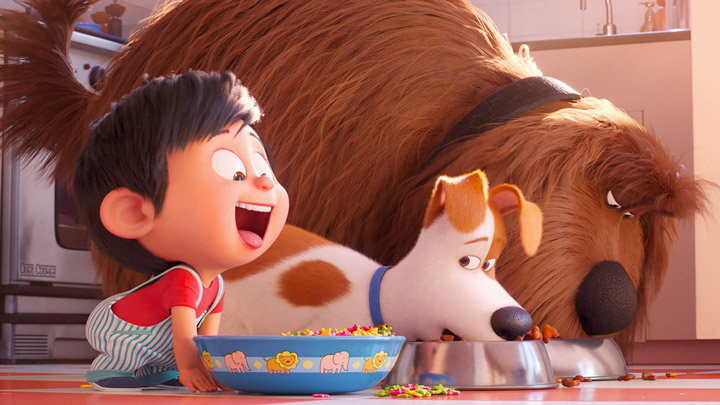 He begins to scratch himself obsessively and is taken to the vet, who places a cone around his head. When the family ventures to an uncle’s farm, they encounter Rooster, a Welsh sheepdog, who is old and takes guarding his various charges (chickens, pigs, a turkey, and sheep) in stride. In what may be a shock for some parents, he advocates letting a child climb a tree even if s/he ends up falling so that s/he can learn not to do that again.

Max slowly builds confidence with Rooster as his guide. A pivotal lesson occurs for Max when he has to risk life and limb to save a lamb.

The second story centers around Max’s squeaky bee toy. He gives this to his sometime love interest Gidget, a Pomeranian, to guard during his absence. Predictably, it falls down the fire escape into an apartment filled with innumerable cats, presided over by the proverbial cat lady. Gidget decides that the only way to get back the bee toy is to pretend to be a cat. For this, she goes to neighbor Chloe, a tabby cat, to give her lessons. The sequences where she is trained to be a feline and then proceeds into the den of the enemy are among the funniest in the movie.

The third tale is the most preposterous, and easily the most poorly written, of the bunch. New character Daisy, a Shih Tzu, shows up to find Snowball, the rebel leader of the abandoned animals in Pets 1, now reduced to a domestic critter who pretends to be a superhero. Improbably Daisy, while stowed in the cargo section of an airplane, discovered a shackled white tiger named Hu.

This young beast is going to the pariah of the moment, the circus. Of course the circus is run by an evil villain straight out of central casting. He even has several wolves at his beck and call to do his bidding. Snowball and Daisy free the tiger but end up being pursued by the wolves back to the city.

The animation remains very good. The cityscapes of New York are well-rendered. Some new animal characters are brilliantly depicted. The turkey on the farm is hysterically funny. Rooster is drawn as commanding and sturdy. The white tiger Hu and the lamb that is rescued are so cute that your heart will melt on visual contact.

There is a lot of wit and creativity in some of the scenes and dialogue. These high points are unfortunately hit and miss. It is like sketch comedy in that if you don’t like something, wait a few moments and something funny will come along. Wonderful moments seem to predominate in the Gidget/cat segment, including Chloe high on catnip listening to “White Rabbit;” Gidget in disguise eating the laser dot; and cats driving a car a la Toonces the Cat to ZZ Top’s “La Grange.”

The vocal performances by the various actors are all adequate. The only one that is worth mentioning is Harrison Ford as Rooster. He is perfect in his characterization of this dog’s wisdom and no-nonsense approach to life.

The neurosis of Max becomes tiresome quickly. It is not interesting and seems inconsistent with his heroism in the first film. It would have been better to just have the entire movie based on the farm with a city vs. country dog theme.

The laziness of targeting an obvious out-of-favor institution like the circus is a discredit to the screenwriters. They go even lower by making the owner so evil that it is beyond stereotype.

It also provides some of the darkest and scariest moments of the picture when the circus owner threatens the tiger with a whip and an electric prod. The animators jump on board by limning the villain and the wolves in sharp angles and shadows. The addition of a Slavic accent to the owner is such a tiresome trope that Bela Lugosi must be rolling in his grave.

There are two issues which are raised in the film that this time do not seem to be addressed. One is the matter of animal hoarding. While it seems like the cats in this scenario are all well-tended, more than likely this would not be the case. To portray this situation benignly for humor misses the opportunity to educate young viewers on the dangers of this practice.

The second item involves the fate of the tiger at the end of the film. Unlike the recent Dumbo, who gets to go back to his native land, this tiger is stuck in Manhattan. Since it would be a spoiler, I will not reveal where he ends up but it is not in a zoo or with individuals trained to handle a wild animal. Too many people think that they can own a wild animal as a pet and end up malnourishing and harming the animal in the process. I can’t wait for parents to have to explain to their kids why they can’t adopt a tiger!

One can argue that the filmmakers have no responsibility to educate viewers on issues which they bring up in a humorous setting. I might agree if the first movie had not so effectively addressed the horrors of animal abandonment. I wonder if the criticism they received from the first film made the screenwriters and producers leery of a similar reaction and so took the easy way out.

Thus what could have been an above-average film ends up being mediocre as a result. But it has excellent animation that makes it a pleasure to view and is very, very funny in places. Once again, if you think that you don’t know if the tiger will escape from the circus, you are watching the wrong kind of movie.

So families can feel safe that they can take their children to the film and have a good time in general. I mentioned some of the darker circus scenes and these may scare younger viewers. Three out of five stars.

Terrier Max (Patton Oswalt) is coping with some major life changes. His owner (Ellie Kemper) is now married and has a toddler, Liam. Max is so worried about protecting the boy that he develops a nervous tic. On a family trip to a farm, Max and mutt Duke (Eric Stonestreet) encounter canine-intolerant cows, hostile foxes and a terrifying turkey, all of which only elevates Max’s anxiety. Luckily, Max gets some guidance from veteran farm dog Rooster (Harrison Ford, making his animated-film debut), who pushes Max to ditch his neuroses, find his inner alpha, and give Liam a little more freedom.

Meanwhile, while her owner is away, plucky Pomeranian Gidget (Jenny Slate) tries to rescue Max’s favorite toy from a cat-packed apartment with a little help from her feline friend, Chloe (Lake Bell), who has discovered the joys of catnip.

And crazy-but-cute bunny Snowball (Kevin Hart) gets delusions of grandeur that he’s an actual superhero after his owner Molly starts dressing him in superhero pajamas. But when Daisy (Tiffany Haddish), a fearless Shih Tzu, shows up to ask for Snowball’s help on a dangerous mission, he’ll have to summon the courage to become the hero he’s only been pretending to be.

Can Max, Snowball, Gidget and the rest of the gang find the inner courage to face their biggest fears?

The Secret Life of Pets 2

I thoroughly enjoyed the first installment in the Secret Life of Pets series. Rather than just being a riff on the trailers which showed pets cavorting when their human guardians left, it took on the issue of animal abandonment.

One can argue that the filmmakers have no responsibility to educate viewers on issues which they bring up in a humorous setting. I might agree if the first movie had not so effectively addressed the horrors of animal abandonment. I wonder if the criticism they received from the first film made the screenwriters and producers leery of a similar reaction and so took the easy way out.

Thus what could have been an above-average film ends up being mediocre as a result. But it has excellent animation that makes it a pleasure to view and is very, very funny in places. Once again, if you think that you don’t know if the tiger will escape from the circus, you are watching the wrong kind of movie.