Mortal Engines is a frustrating film. It is both visually engaging and marred by mediocre performances set against a timeworn plot.

The movie is based on the first of a four-book series written for teens by Philip Reeve. The premise is quite unique. A Sixty-Minute war not only eradicated civilization, it also caused geographic upheaval. In London, the city was eventually reconfigured into a moving machine composed of tiers of structures. St. Paul’s Cathedral, the only building to completely escape destruction, sits atop this roving creation. 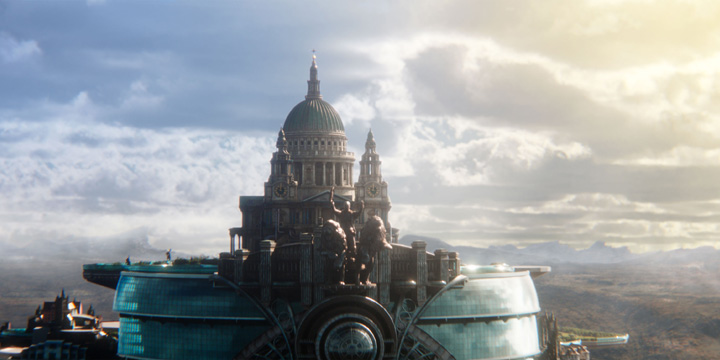 London has recently left England to go to Europe because it needs resources to continue to feed its citizens. Thaddeus Valentine (Hugo Weaving) directs this enterprise.
The movie begins with London pursuing a mobile Bavarian city. There is a prolonged chase sequence, after which the defeated Bavarians are welcomed into the community while their goods are plundered to keep London going.

Valentine’s daughter Katherine (Leila George) is doing research and meets Tom Natsworthy (Robert Sheehan), a historian. He guides her to a private room and reveals a secret stash of “old tech”. It is hidden because the Engineers would just take it as they do anything else that they need.

Tom is dispatched to the lower levels to look for historical items in the captured city’s treasure trove. He finds a piece of old tech that Valentine also recognizes and takes.
In the crowd of Bavarians is a young woman with a scarred face. Hester Shaw (Hera Hilmar) approaches Valentine and stabs him while screaming that she is doing it because he killed her mother. After she runs, Tom pursues her to a chute that leads out of the city. She jumps but not before telling Tom some pertinent facts about her situation. When Tom repeats this information to the arriving Valentine, he pushes Tom down the same chute.

Tom and Hester become unwilling allies who are very different. He is talkative and she is taciturn. He has no experience living outside the City and she is an expert at this activity. Predictably, opposites attract, although it takes a while.

From here, the story goes on two parallel tracks. One involves Valentine’s secret construction of a lethal old tech weapon called Medusa. His ultimate goal is to go to Asia to the Shield Wall, behind which lies a traction-less society, destroy the Wall, and plunder their resources for the good of London.

The other track involves the continuing road adventures of Tom and Hester. After they are captured by slave traders and put up for sale, they are rescued by Anna Fang (Jihae). She flies them to an aerial city elevated by large balloons. Fang knew Hester’s mother and so believes that Hester may hold the key to stopping London. 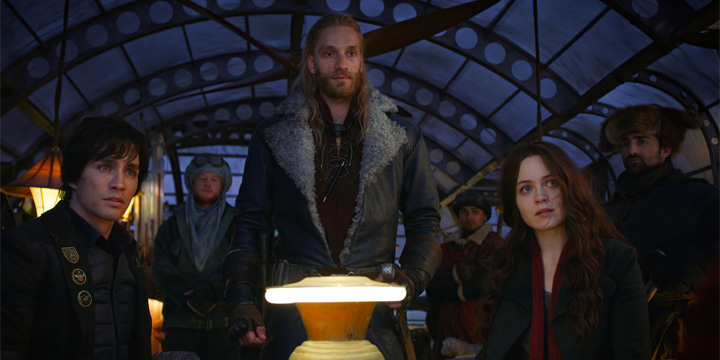 Back in the first track, Valentine discovers the secret stash of old tech that Tom hid and now has what he needs to make Medusa operational. He disposes of the Lord Mayor when he complains and heads to Asia.

In the second track, Shrike, a Stalker (a dead person/cyborg) arrives to kill Hester. Shrike took Hester in and raised her after her mother was murdered. Hester had agreed to let Shrike make her a cyborg but broke her promise when she heard Valentine had come close enough for her to kill him. Shrike is killed but not before the aerial city is destroyed. Everyone flees to the Shield Wall to prepare for London’s arrival.

The premise is intriguing but the story degenerates into various standard tropes. These include the obligatory unlikely romance, the struggle of good versus evil, and the heroes’ journey. Eventually the film concludes with a battle scene reminiscent of Star Wars and James Bond, replete with a countdown clock. Nothing new is explored here. It is just set against a different background.

The sets and costumes have a steampunk feel worthy of the premise. London and the aerial city are marvels to behold. The Medusa effects are excellent. By contrast, the battle sequences are shopworn. They are really an excuse to showcase stunt work and are prolonged.

The acting seems to be a fault of the screenplay. Characters are portrayed as archetypes rather than living, breathing human beings. The mostly no-name cast often seems wooden.
One surprising exception to this is the non-living character Shrike. We see his relationship with Hester in flashbacks. Stephen Lang’s non-emotion is perfect for this portrayal. It is too bad that their relationship could not have been explored more deeply.

This is the fatal flaw of the film: it is so concerned with where it is going that it does not care how it gets there. Admittedly, it is hard to narrow a book down to a two-hour movie but in this case more of a focus on the characters would have made this picture better.

Not having read the book, I did find the picture engaging when it had an interesting plot development. But these were few and far between.

I was particularly saddened by the defects in this film because it was written by Peter Jackson, Fran Walsh, and Philippa Boyens of “The Lord of the Rings” trilogy. But then I remembered that they also wrote “King Kong.”

So go to see the visual execution of the premise. Just don’t expect too much in the way of enlightenment or high-quality entertainment.

Rating: Two and a half out of five stars

Thousands of years after civilization was destroyed by a cataclysmic event, humankind has adapted and a new way of living has evolved. Gigantic moving cities now roam the Earth, ruthlessly preying upon smaller traction towns. Tom Natsworthy (Robert Sheehan)—who hails from a Lower Tier of the great traction city of London—finds himself fighting for his own survival after he encounters the dangerous fugitive Hester Shaw (Hera Hilmar). Two opposites, whose paths should never have crossed, forge an unlikely alliance that is destined to change the course of the future.

BASED ON THE BOOK BY: Philip Reeve

Not having read the book, I did find the picture engaging when it had an interesting plot development. But these were few and far between.

I was particularly saddened by the defects in this film because it was written by Peter Jackson, Fran Walsh, and Philippa Boyens of “The Lord of the Rings” trilogy. But then I remembered that they also wrote “King Kong.”

So go to see the visual execution of the premise. Just don’t expect too much in the way of enlightenment or high-quality entertainment.