Disney’s “The Nutcracker and the Four Realms,” despite its unwieldy title, is an enchanting holiday film full of wonder and adventure. Directors Lasse Hallstrom and Joe Johnston have imbued the picture with excellent visual effects while providing a very human story of loss and empowerment.

The story begins in a breathtaking manner as we segue from the opening Disney castle to a bird flying over Victorian London and into the attic of the home of Clara Stahlbaum (Mackenzie Foy, Renesmee in the “Twilight” series and “Interstellar”). She is demonstrating her knowledge of physics and mechanics to her younger brother Fritz (Tom Sweet) through a device (an homage to the modern game “Mousetrap”) that she has created.

Summoned by the maid, they go downstairs to the family Christmas tree where her sister Louise (Ellie Bamber) and her father (Matthew Macfayden) are waiting. He distributes gifts to each child from their late mother (Anna Madeley). Clara receives an ornamental egg that has a keyhole in it, but no key. She also receives a note from her mother stating that all she needs is inside the egg.

Clara is unable to open the egg despite her skills. Her father reminds her that they need to make an appearance at a Christmas party. Clara does not want to go but her father insists. 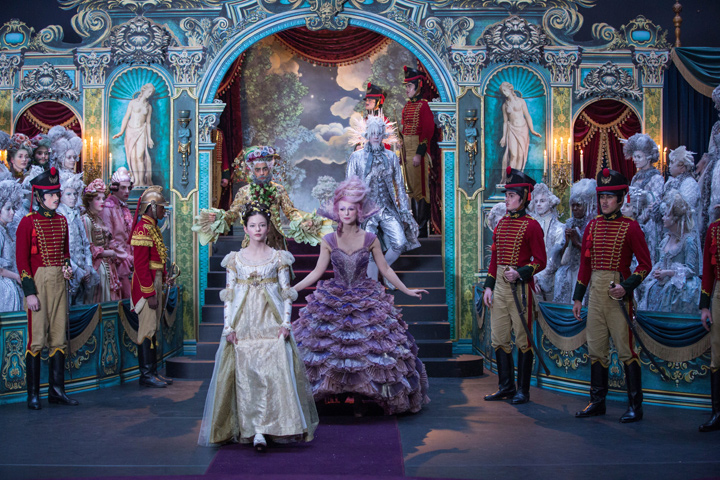 They arrive at a palatial estate. Clara’s godfather (Morgan Freeman) is in the basement and has her fix a device that he has clearly rigged as a test for her. He raised Marie, Clara’s mother. Going upstairs to the main party, Clara and her father argue over their different ways of grieving for her mother which ends with her making a very hurtful remark to her father.

This is interrupted by the announcement that it is time for Christmas presents. Each child at the party finds their name attached to a long string which they follow through the house to their gift. Clara ends up going through an opening down a hallway into another world.

Here a very cute mouse ends up with a key which may be the key that opens her egg. She follows the mouse to a bridge where she meets a living Nutcracker, Captain Phillip (Jayden Fowora-Knight), and crosses into the Fourth Realm, a dark and scary forest.
They are forced to beat a retreat to a large castle. Here they discover that Clara’s mother was once Queen of this world. She left in her stead four regents, one for each realm: Sweets, Snow, Flowers, and Amusements.

Sugar Plum Fairy (Keira Knightley) takes now Princess Clara under her literal wings. She explains that Mother Ginger (Helen Mirren) was cast out to her previous Realm of Amusements (now called “the Fourth Realm”) for disloyalty. Sugar Plum warns that Mother Ginger is raising an army to invade the other 3 realms which are powerless without a key to run a machine which Marie created for their defense. 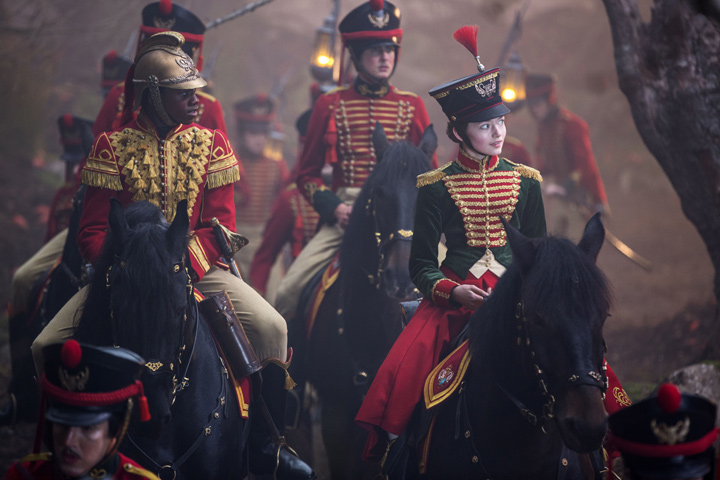 Clara and Phillip take an army into the Fourth Realm to find the key which the mouse had. Here things take an interesting twist as Clara finds out the truth about the Four Realms.
The description of the story does not do justice to the fantastic visuals of this film. They are everywhere, from the set design in London to the costumes to the impressive castle in Marie’s Kingdom. Steampunk elements abound in both London and the Four Realms. (Clara’s last name, Stahlbaum, translates to “steel tree.”)

But even more importantly than the outward delights, this is the story of a young girl coming to terms with the loss of her mother and finding her own place in the world. This is a perfect movie for anyone who has dealt with mother loss. It captures the hurt without being overpoweringly depressing and, through the story, demonstrates that each person grieves in their own unique way. It also provides hope that life can go on and that the memory of the departed is never truly lost. A particularly poignant flashback scene between Marie and Clara is pitch perfect in tone.

This is counterbalanced by the portrayal of Clara as an empowered young girl who is adept at the sciences and as an inventor. It is very refreshing to see such a positive role model, who is not denigrated by others for being proficient in these skills. It is through her knowledge and humanity that when she opens the egg, she finally deciphers the true meaning within.

There are two lovely ballet sequences, one in the castle and a pas de deux over the end credits, that are a tribute to the original stage Nutcracker. Misty Copeland is featured in the castle when she dances to an interpretive explanation of the origin and history of the Four Realms. These artistic touches are beautifully rendered.

James Newton Howard provides the score, although there are motifs from the original Nutcracker Suite. The music is top-notch, and since Newton is a perennial Oscar nominee, it would not surprise me if he received yet another Oscar nod. In addition, I think that it is highly likely that the film will receive nominations for Production Design and Costume Design. Perhaps a Visual Effects nomination is possible.

The film is probably not for very young children. The initial scenes in London may seem talky to them and leave them squirming in their seats from boredom. There also are some scary elements in the foreboding forest of the Fourth Realm and the final battle sequence. Harlequins (a form of clown to me) are creepy with their jerky movements and gibberish. But the movie should be fine for tweens and up.

As the end credits roll, the beautiful voices of Andrea Bocelli and his son Matteo sing “Fall on me.” It is worth staying through the credits to hear this moving song.

“The Nutcracker and the Four Realms” will take you on a wondrous journey into not only a land of enchantment, adventure, and mystery, but into the depths of the human heart.

Rating: Four and a half stars out of five

All Clara (Mackenzie Foy) wants is a key – a one-of-a-kind key that will unlock a box that holds a priceless gift. A golden thread, presented to her at godfather Drosselmeyer’s (Morgan Freeman) annual holiday party, leads her to the coveted key—which promptly disappears into a strange and mysterious parallel world. It’s there that Clara encounters a soldier named Phillip (Jayden Fowora-Knight), a gang of mice and the regents who preside over three Realms: Land of Snowflakes, Land of Flowers and Land of Sweets. Clara and Phillip must brave the ominous Fourth Realm, home to the tyrant Mother Ginger (Helen Mirren), to retrieve Clara’s key and hopefully return harmony to the unstable world. Starring Keira Knightley as the Sugar Plum Fairy, Disney’s new holiday feature film “The Nutcracker and the Four Realms” is directed by Lasse Hallström and Joe Johnston, and inspired by E.T.A. Hoffmann’s classic tale.

The Nutcracker and the Four Realms

Disney’s “The Nutcracker and the Four Realms,” despite its unwieldy title, is an enchanting holiday film full of wonder and adventure. Directors Lasse Hallstrom and Joe Johnston have imbued the picture with excellent visual effects while providing a very human story of loss and empowerment.

The film is probably not for very young children. The initial scenes in London may seem talky to them and leave them squirming in their seats from boredom. There also are some scary elements in the foreboding forest of the Fourth Realm and the final battle sequence.