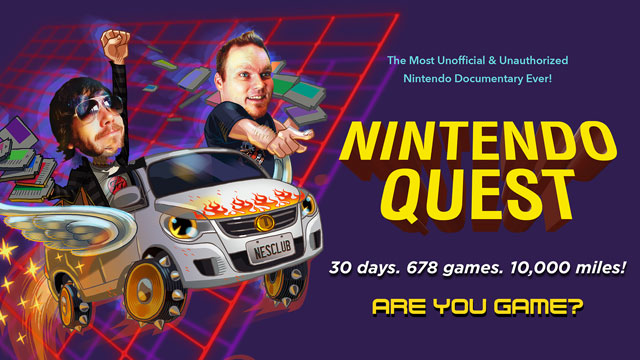 Jay Bartlett is a man on a mission, in 30 days we wants to collect all 678 original commercially released games for the Nintendo Entertainment Series. The biggest caveat, he cannot use the internet to make any of the purchases, he must travel to stores and private collections to buy each one in person. Joined by his friends and filming crew, Jay sets out from his home in London, Ontario, Canada across Canada, central and the eastern United States on his quest.

The movie touches on the history of Nintendo and why is has had such a lasting impact, and is divided up into chapters, each of which begins with a quote from a popular NES game. The chapter titles fit well with the coming on screen material. The animated history segments, while interesting, were a bit light. And web series like the Game Historian on YouTube, though varying in production quality, handle that material better.

While other reviews will talk about Jay’s journey more, I found that two things jumped out at me as I watched this with my sons, and they were things that film did not spend much time on, Jay’s psychology and finances. 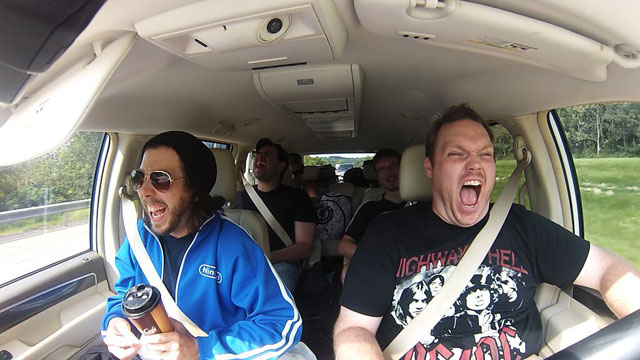 The quest and movie were both Kickstarter funded. The original Kickstarter was for “The NES Club” before they got the rights from Nintendo to use their name. That “ickstarter raised almost $17,000 for the quest. The movie’s production and distribution was then funded by a second “Kickstarter that raised over $40,000.

None of this was mentioned in the movie, and I only found out that this was “ickstarter funded by watching the credits, and then doing additional research. The movie only touches on finances by showing a status bar on the lower left of the screen with how much of their funds are left, but without numbers. It also chronicles the negotiations over one particular game, the purchase price of which $4050, dropped that status bar by approximately a third. This placed their actual quest budget somewhere on the order of $12,000-$13,000. Taxes are paid on Kickstarter folks. Yet this is never mentioned. The only other time that costs are mentioned is in the purchase of price of certain games, including Jay’s “Holy Grail” Item, a mint in box version of which was on sale on ebay for $77,000.

The quest has its pitfalls and real life interruptions, with Jay having to go back home twice to return to work. But what is most interesting is Jay’s psychology. While it is difficult to judge Jay’s age in the film, there are clues that he is in his late twenties to early thirties. He has three passions, music, video games (classic NES games in particular) and Star Wars. There is a brief segment about halfway through the movie where Jay discusses his relationship with his father. Jay describes his late father as, “he was a tyrant, he was awful, he was the worst person I’d ever met in my life.” Other than a mention that his dad was always in and out of work and that he never connected with his dad through games, music and Star Wars, there is no reason why he describes his own father in such a way.

This is where the psychology of the whole quest comes together. Jay has serious unresolved issues regarding his father’s death. A recounting of the night his father died makes up a short segment of the middle of the movie. After seeing that portion the whole thing made sense. Jay’s home is covered in video games, consoles, posters, toys, and memorabilia (including life size Jar-Jar Binks and Darth Maul statues). Jay has filled his life with his three passions and appears to be in a state of perpetual adolescence. Even my boys noticed that he seemed a bit off.

Jay’s psychological state manifests in other ways as well. Beyond the frustration of keeping the costs of his journey in check, there are several points where he seems on the verge of an emotional breakdown regarding some of the game finds. At one point, his lifelong friend, and maker of the film, Rob McCallum asks why Jay doesn’t fly to some of these places, insisting that they road trip everywhere. Jay is claustrophobic and appears afraid of flying. When he does eventually fly, he appears on the edge of tears the whole time.

From a psychological perspective, the movie is an interesting watch, and I almost wish they had dwelled on that aspect more.

As for the quest itself, I’m a bargain hunter and seeing Jay deal with and haggle with some of the store owners, and even meet with some minor gaming celebrities was interesting in that way. My boys enjoyed seeing the quest, but all of them said they would never embark on such a journey, to quote my oldest. “There’s no point, he’s just filling a hole (in his life).” Ultimately that is what this movie is, Jay filling a hole left in his life, possibly by his father’s untimely demise and the things he never got to say or do with him, possibly to create some sort of meaning that the rest of his life did not provide.

It was well put together and executed, and if they had addressed the Kickstarter and psychological aspects I would have rated it higher.

Available now on Vimeo On Demand, and will be available in US on other VOD platforms and on DVD on December 1.

One man. 30 days, 678 games. No online purchases. It’s the premise that launched a film over 10,000 miles in the making and showcases the adventure of video game rock star, Jay Bartlett, a fanatic collector in pursuit of his dream to own a complete official North American NES library. Along the way, filmmaker Rob McCallum examines the enduring legacy of the NES and Nintendo while talking to the enthusiastic community of retro gamers and game collectors.

Ultimately that is what this movie is, Jay filling a hole left in his life, possibly by his father’s untimely demise and the things he never got to say or do with him, possibly to create some sort of meaning that the rest of his life did not provide. It was well put together and executed, and if they had addressed the Kickstarter and psychological aspects I would have rated it higher.