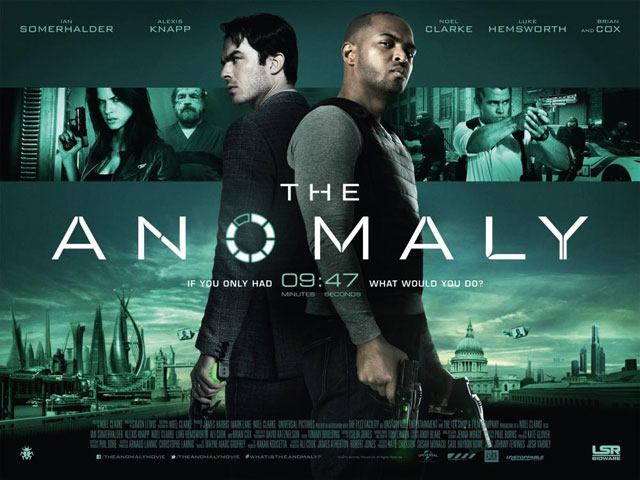 Warning: this review contains a potential spoiler that explains why the time slips are happening to the protagonist.

For some reason, this movie has marketing blurbs that promote it as either a time-travel mystery or a parallel universe mystery, where our hero has only 9 minutes, 47 seconds to figure out what his next move will be so he can prevent a global disaster before he slips away again.

Problem is, there is not one whiff of time travel or dimensional travel in the film at all. Never mentioned as a reason for what’s happening to the hero, never hinted at, not once. This, I find amusing, but I wonder if it will cause too much confusion in people who aren’t as deeply saturated in science fiction as we are (based on some other reviews I’ve seen, I think this might actually be the case).

Ryan Reeve (Noel Clarke) is a former soldier who has PTSD. He first wakes up in the back of a moving van alongside a young boy being held prisoner. But after helping the boy escape, he comes to the terrifying realization that he’s in fact the kidnapper. Even more startling, five years have passed since he was last awake. Ryan soon learns that he’s caught up in a global conspiracy and his brief moments of consciousness are the Anomaly.

Ryan’s only connection with reality is Harkin Langham (Ian Somerhalder), a sophisticated scientist who is not only a driving force behind this conspiracy (and potentially Ryan’s assassin), yet who also seems to be working with Ryan during his blackouts. Harkin explains that each time Ryan regains consciousness, he only has 9 minutes and 47 seconds before he blacks out again. And that the number of times he’ll “come back” are limited, and eventually he won’t come back at all.

Using his military training, Ryan figures out how to quickly ascertain where he is and what he needs to do each time he “wakes up”, before his time runs out. During one of these phases, he teams up with Dana (Alexis Knapp), a woman being kept as a sex slave because of her debts to a Russian mobster, and with her help, he figures out what the plot his alternate consciousness is involved with, and uses all of his skills and know-how to do what he can to uncover enough pieces to prevent it — and regain complete control over his consciousness before he can’t come back again.

The various city scenes around the world show a near future still filled with a lot of the same issues we have now, but a lot shinier, and apparently far more desperate to solve many of those problems. The tech and the biotech hinted at are intriguing, and how they might be used for the overall “nefarious plan” is something that could make Philip K. Dick proud (and terrified).

The fight scenes are choreographed and filmed in an interesting way. It might remind one of the bullet-time technique used in The Matrix, but it’s not… there are no angular spins around scene, just slo-mo filmed on high speed, with physical contact and no edits and no cuts (something confirmed in the interview with Noel Clarke coming up later this week).

I’m not sure how the promo material came to the conclusion that Ryan is traveling between parallel dimensions, but eventually Ryan’s blackouts are mostly explained by Harkin Langham as being caused by the fact that his consciousness isn’t the dominant one in his mind anymore; that his body has been hijacked and consciousness replaced by another… and the 9 minutes and 47 seconds he has when he’s back to himself are from an unforeseen glitch in the technology they are using to achieve that hijacking, and the window for what’s causing those glitches is closing. I just hope that promotional goof doesn’t cause people to give up on the movie too soon while watching it.

One thing missing was a way to use Brian Cox more in the film, other than showing a newsreel interview from several years prior to the events happening in the film. Given the technology we’ve seen in use in the film, that was a huge missed opportunity in my book. Another thing that could have used some beefing up were the motivations for our bad guys… some of it is explained as to “what” they plan to do, and a little bit on the “why”, but some deeper digging into why they thought their “why” was the path that made sense to them could have increased a few emotional connections with the main characters.

The Anomaly is a decent film, a near-future world filled with interesting biotech concepts and a great scene-chewing villain, but a little more character-building to better explain some of the motivations — and maybe a little more time to explore those motivations — I think might have stepped the story up a notch.

The Anomaly is a decent film, a near-future world filled with interesting biotech concepts and a great scene-chewing villain, but a little more character-building to better explain some of the motivations — and maybe a little more time to explore those motivations — I think might have stepped the story up a notch.