Has it really been 40 years?

I remember hearing about Rocky Horror for the first time when I was catching my very first midnight movie — the animated classic Heavy Metal, in fact — and I was intrigued by what some of the other late night aficionados were saying about this quirky horror-comedy-musical that had to be experienced to be believed.

So I drove down to a dive theater in another part of town the next weekend, where some of them said the best audience participation would be, but was told that I wasn’t yet old enough to get in to see the show. But standing outside, all on my own, leaning up against my car, and watching the costumed crowd who was old enough to get in was also a show worth seeing that first time.

After seeing some of the costumes being paraded into the theater, my curiosity grew, and my amusement and fascination with the totality of how immersed this group of relatively diverse folks had become with a cult movie had me smiling the rest of the night. Even though I couldn’t get in to see the film at that theater for almost another year, I realized that geekdom honestly had no bounds, and that anyone could be a geek about anything that they felt close kinship to or which story had spoken to the deepest, truest parts of them. In that moment, I was suddenly proud for still harboring a deep desire to own a Battlestar Galactica Colonial Warrior uniform, completely decked out with boots, dress cape, laser pistol and other gadgets.

The sing-alongs, the accuracy of the costumes, the “participation” cues, all of it a world unto itself where you can forget yourself for a while, and be Riff Raff, or Frank, or Magenta or Columbia, or even Brad or Janet. Some might say “subculture”, these days we say “cosplay pageant at the con”. Either way, there’s a glorious joy to finding your geekdom, and I think it’s easy enough to say that Rocky Horror was something a lot of people who could never quite find themselves latching onto Star Trek felt they could more easily embrace.

Then again, maybe the world would be an entirely different place if Kirk and Spock had sung show tunes… on the actual show, that is.

The 40th Anniversary Blu-ray & DVD are out today, for your home viewing pleasure — but even with planning a party with friends, it’s still just not quite the same as buzz from that theatrical screening, is it?

And just in case: HBO will have a special midnight airing (but of course), Saturday, September 26, and it’s also available on HBO NOW and HBO GO.

Now all we need is an anniversary screening in a huge theater with a stage for performers, introduced and hosted by Joe Bob Briggs, and who knows, world peace might be achieved for one night. 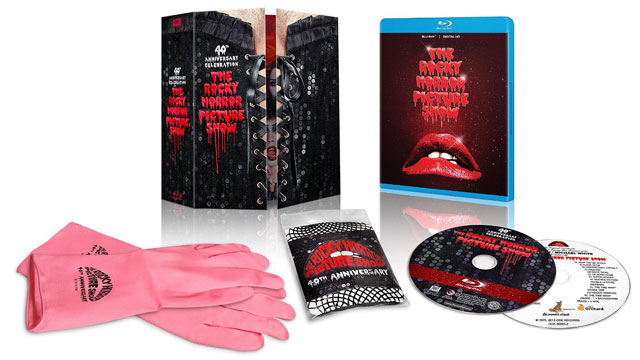