Northmen: A Viking Saga is the Viking version of Braveheart. While there are some historical inaccuracies, and a couple of all-too-convenient plot issues, this is a super fun movie filled with gory battles, beautiful scenery and a couple of epic performances.

Instead of Mel Gibson, we have Tom Hopper who plays Asbjorn, the son of the deceased outcast Viking leader. He’s young, he’s muscled and he’s pretty fantastic. His character proves himself over and over again to be a leader worthy of his father’s name, against some pretty stacked odds.

Next, we have Ryan Kwanten (of True Blood fame). He plays an outcast monk Named Conall, with some seriously badass fighting skills. When the stranded Vikings find themselves lost and under siege by a band of filthy Scottish brigands, with the daughter of Scottish King Dunchaid, Inghean, as their hostage (played by the lovely Charlie Murphy) Conall comes to the Viking band’s aid and whips some serious tail. Not only is Kwanten in pretty sick shape from his days on True Blood, his acting chops are pretty well versed. If I hadn’t recognized his face, I would never have guessed this was the same guy who played the goofy, but gorgeous brother of Sookie Stackhouse.

The other Vikings are truly lovable in their gruff attitudes and their loyalty to both Asbjorn and Valhalla. One of my favorite Vikings was wonderful — Darrell D’Silva, who played Gunnar was pretty epic. Grey-haired and always ready for a fight, he was just fun to watch. He was also seriously hard to kill, which made him double epic.

The bad guys, who were Slavic mercenaries, lead by Ed Skrein as Hjorr and his older brother Bovarr, played by Anatole Taubman, were vicious, and extremely lucky. The convenient plot issues revolved around the good guys never catching a break and the bad guys running into good fortune around every turn.

The Slavic mercenaries, nicknamed the wolf pack, were on horseback. When they lost their horses, they conveniently run into a farm with enough horses for all the men, as well as saddles and saddle blankets enough for everyone. That was just a tad too convenient for me, especially when the poor Vikings were constantly on foot and running to save their lives.

It also seemed that no matter how many men the wolf pack lost, their numbers didn’t decrease much until the very last battle.

Speaking of the last battle, when Hjorr was finally defeated, as we knew he would be, he sinks into a bog on a Scottish moor. He’s got a piece of broken sword lodged in his neck as he sinks. Our hero, Asbjorn is saved from drowning in the very same bog by the damsel not so in distress, Inghean, Hjorr jumps up from the bog for one last roar before Conall’s spear runs him through. Sorry, but have you ever been stuck in a bog? It’s like cold, smelly, wet quicksand. You can’t just jump up out of that once you’ve sunk. 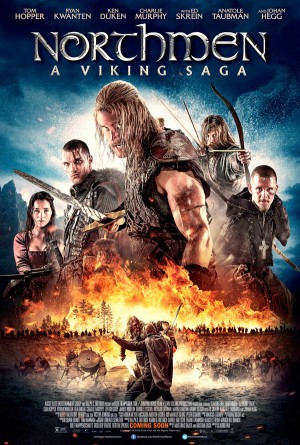 So, other than little things like that that were just a tad too convenient or inaccurate, this was a very fun, action packed movie. I was highly entertained.

Northmen: A Viking Saga is the Viking version of Braveheart. While there are some historical inaccuracies, and a couple of all-too-convenient plot issues, this is a super fun movie filled with gory battles, beautiful scenery and a couple of epic performances.