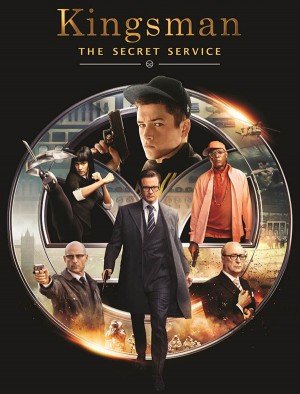 Simply because of the track record in recent years, it seems as though comics properties not produced by Marvel Studios or DC Entertainment run the risk of being well done both in story and in visuals (Snowpiercer), or not so much (Teenage Mutant Ninja Turtles).

Honestly, I hadn’t realized that Kingsman: The Secret Service was based on a comic until the second trailer was released last fall… the first trailer had already piqued my imagination (I have always loved The Doors, what can I say?)

But I still went into the film with diminished expectations, mostly because Marvel’s standards are such a high bar to aim for when adapting comics, and from what I can tell, this one doesn’t quite stick with the source material. Sometimes that can be a bad sign, but thankfully, I was pleasantly surprised when both the story and the visuals were satsifying.

Kingsman: The Secret Service follows two paths, one of atonement and one of self-discovery. Harry Hart (code name Galahad, played by Colin Firth) makes an error on a mission and a recruit-in-training sacrifices his life to save Harry and the rest of the group. Harry’s attempt to reach out to the widow of his fallen trainee fails to ease her grief, giving him no option but to leave his owed favor with their young son Gary.

Fast forward to the present day, when another Kingsman, code named Lancelot, tries to save a kidnapped scientist, but is killed in the process. While Galahad is attempting to unravel what happened and who was responsible, a grown Gary, nicknamed Eggsy (Taron Edgerton), gets into serious trouble (just one part of a pattern of failures in his life since his father died), and calls in the favor he recalls his family is owed.

Thus Eggsy is reacquainted with Harry, and joins a group of recruits chosen to compete to replace the fallen Lancelot via a rigorous and extensive testing and training program overseen by the service’s tech and testing specialist (code name Merlin, played by Mark Strong)… and maybe to see for himself that he truly is Kingsman material like his father had been.

Samuel L. Jackson’s portrayal of the megalomaniacal billionaire villain Valentine seems to echo the style of media and political “influencer” played by Jonathan Pryce in the 007 film Tomorrow Never Dies, using his technological creations and his media savvy to lure the public into doing what he needs them to do… only his goal is far more destructive, and the Kingsman’s service attempt to thwart him runs into trouble as Valentine tries to find out who they are so he can destroy them and keep playing his game.

There seems to be a strange balance of camp and over-the-top violence, and it wasn’t until much later that I realized that some of the more violent scenes were indeed reminiscent of a Tarantino shoot-em-up, where weapons, shell casings and bodies compete to see how many can hit the floor before the scene is over (just remember “Freebird” when you see the movie). It’s that strange yet familiar combination of funny and disturbing that we expect from Tarantino, and maybe not in a comic book movie.

But overall, I enjoyed the movie, which to me seemed to be more the story of Eggsy’s journey to become the person he might have been had his father lived and his mother’s self-respect and self-worth hadn’t vanished in her grief at losing her husband rather than one of a highly secret organization trying to save the world from a billionaire megalomaniac. Maybe it was watching Harry try to be the father figure he feels responsible for Eggsy losing, the letting him know over and over again that he’s stronger and better than he has been, I’m not sure, but their personal interactions and seeing how Eggsy responds when he realizes someone else believes in him pays off later, amidst a handful of unexpected story twists.

Pacing wise, there is a lot going on that seems to get sped past a little too fast, and in some of the longer fight scenes, the switching from normal speed action to slow motion enhanced sequences and back seems misplaced, almost disjointed… I know what they were going for, but something felt off in the pacing and timing of when they happened in those fight scenes.

That said, this is a movie I would see again, happily so. This is the type of popcorn movie that is worth the label in my book.

I went into the film with diminished expectations, mostly because Marvel’s standards are such a high bar to aim for when adapting comics, and from what I can tell, this one doesn’t quite stick with the source material. Pacing wise, there is a lot going on that seems to get sped past a little too fast, especially in some of the longer fight scenes. That said, this is a movie I would see again, happily so. This is the type of popcorn movie that is worth the label in my book.