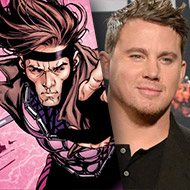 In May 2014 it was announced by 20th Century Fox and Marvel Studios that X-Men character Remy LeBeau – aka “Gambit” – would get his own movie. Now we can reveal that Jump Street’s Channing Tatum will star as the card throwing superhero.

“Gambit” is highly intelligent and has the ability to manipulate and control kinetic energy. Before joining the ranks of the X-Men he was a successful thief and con man mentally controlling energy as he desired to acquire whatever he was trying to steal or whomever he was conning. Once he became an X-Men he put those powers to work in helping to defeat other mutants who used their powers for evil or selfish purposes.

He has worked closely with Storm on several missions and continues to have an on again-off again romantic relationship with Rogue.

“Gambit” now joins with one other X-Men character to get a solo film; “Wolverine,” starring Hugh Jackman. Rumor has it a third – Deadpool (Ryan Reynolds) may also join them with his own solo act.