I raved about Sleepy Hollow last year when it came on the scene. Now, what feels like years but is only eight or nine months later, Sleepy Hollow is back. The question is – should you be back with the residents of the U.S.’s most demonic area as well?

Season One gave us five main principals we cared about – Ichabod Crane (Tom Mison), our time traveling hero from Revolutionary times; Abigail Mills (Nicole Beharie), our brave and bright police detective who’s seen more than she wants to admit; Jenny Mills (Lyndie Greenwod), Abbie’s sister, who’s seen the same but isn’t denying it, and so has spent more time in mental institutions than not; Katrina Crane (Katia Winter), Ichabod’s wife finally freed from Purgatory only to end up somewhere worse; and Captain Frank Irving (Orlando Jones), the nonbeliever forced to believe. These five ended up fighting a whole lot of demons – their own and real ones – and the season ended with all five of them in various forms of terrible peril. 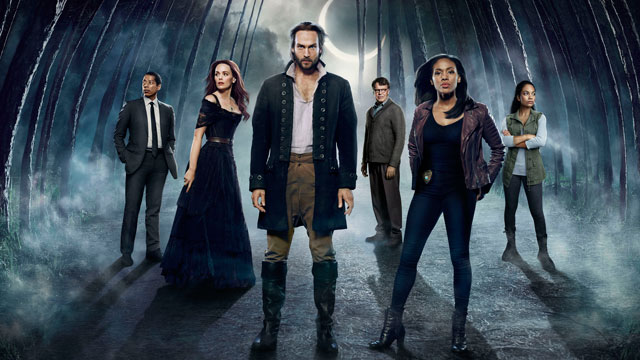 Season Two starts with a mind-bending episode that resolves or at least clarifies what’s going on – and gives us another John Cho cameo, which I, personally, can never get enough of – then picks up where Season One left off. With a few key differences.

Season One was all about averting one specific End of Days attempt. It was a short, tester season, in that sense, so every episode built on the ones before it. Layers that were uncovered all tied back, and with only a baker’s dozen of episodes to work with, this kind of pacing made sense. Now, with what appears to be a full season ahead, the show is turning more into The X-Files: Sleepy Hollow Division. This is not necessarily a complaint, but like The X-Files, Sleepy Hollow now seems to have the overarching Stop Armageddon theme with a lot of Monster of the Week episodes interspersed. So far, every monster is tying back to Ichabod or Abbie in some way, which may put a strain on viewers’ credulity. So far, it’s working, but it’s an approach that could cause viewers to get bored – or could end up with nine seasons and two movies. So, time’s gonna tell on this one.

The other differences are in cast additions. This has always been a show breathtakingly color blind in terms of casting and, happily, that continues now. Also, the hottie factor has been upped – in addition to Ichabod (Mison is already a bonafide heartthrob and has been since the show premiered), Nick Hawley (Matt Barr) has been added as an Indiana Jones/Han Solo type of character who’s there to sort of help out, give the show some more good looks, and add yet another love triangle, this one between Hawley, Abbie, and Jenny.

And the main love triangle – between Ichabod, Katrina, and Abraham/The Headless Horseman (Neil Jackson) – isn’t slighted, because we get to see the horseman with a head due to some magic. At least Katrina does, and we see him with a head when we’re in her POV. So, good looking people are all over the screen, and more show up every week. Well and good.

But… the additions of Barr and Jackson – as well as the ever-excellent John Noble joining the cast permanently as the baddie with the ties that bind – don’t make up for the grievous lack of Orlando Jones’ Captain Irving through the first five episodes. He’s still in the main credits, and we’ve seen him in a couple of episodes, but not all, and not nearly enough.

A joker in real life, Jones brought some needed gravitas and skepticism to a show that teeters on the fine line between scary fun and ludicrous. It’s still on the side of scary fun, but as we start to take on more Monster of the Week situations, versus the overall Stop This Season’s Attempted Armageddon, Jones is missed more and more.

The reason for Jones’ on-screen absence makes sense for the storyline, but for this viewer, at least, the show is lacking just a little when we don’t see him in there, somewhere, somehow. The few scenes at the Sheriff’s office aren’t the same without him, in part because now Abbie and Ichabod have a new Captain, Leena Reyes (Sakina Jaffrey), who isn’t pro their working relationship. Yes, this creates the dramatic requirement that the heroes always have conflict thrust upon them, but, sometimes, when you’re fighting the Legions of Hell, it’s nice to have someone in authority who has your back.

Sleepy Hollow’s numbers are down from last year (though it does extremely well on DVR). Whether it’s the slight changes the show has made (maybe) or the long lapse between seasons (probably), the show is still good, compelling fun. I think the production team should have done for Sleepy Hollow what was done for Arrow at the start of that show’s Season Two – a one hour special recap episode that catches new viewers up and refreshes the minds of old viewers. But, shocking one and all, I wasn’t consulted on their marketing strategies. (I know, I’m appalled, too.)

Bottom line: Sleepy Hollow remains entertaining, scary, almost out of this world fun and I’m still sold on watching it regularly, though if Orlando Jones isn’t back on my TV screen with a little more frequency that commitment could wane.

On the other hand, next week’s episode appears to be a werewolf one. So, you know, bring on the Monster of the Week!