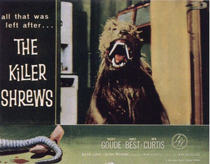 On an isolated island in the midst of a hurricane, a small group of people are terrorized by voracious, mutant creatures in The Killer Shrews, digitally restored and available on DVD November 11 from Film Chest Media Group.

The Killer Shrews was released in 1959 and is considered one of the best low-budge B-Movie horror flicks of that era of filmmaking. Horror master Stephen King has it on his short list as a favorite.

The movie stars James Best (The Dukes of Hazzard), Baruch Lumet (The Pawnbroker), Miss Sweden 1956 Ingrid Goude and Ken Curtis of Gunsmoke and The Searchers fame.

Fully remastered the DVD for The Killer Shrews is presented in full screen, original sound to capture that 1950’s feel with an aspect ratio of 4 X 3 and is a must have for all B-Movie aficionados.