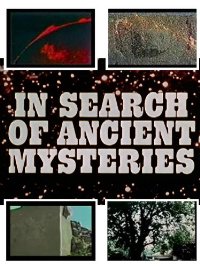 Take an in-depth look at Earth’s early inhabitants in In Search of Ancient Mysteries, entering our galaxy on DVD October 28, 2014 from Film Chest Media Group.

Scientists and scholars analyze strange findings in statues, cave paintings and writings which suggest that people of the distant past may have been more sophisticated than previously thought … and may have been in contact with aliens or some other advanced civilization.

The success of this documentary led to the popular, long-running series In Search Of … (1976-1982), hosted by Leonard Nimoy (Star Trek). A must-have for all sci-fi fans, mystery enthusiasts, scientific devotees and history buffs.

In Search of Ancient Mysteries is presented in full screen with an aspect ratio of 4 X 3 and original sound.