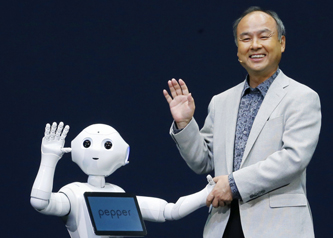 Japanese billionaire Masayoshi Son has promised that his SoftBank humanoid robots will hit U.S. stores just in time for the 2015 Christmas shopping season for the affordable sum of $1900 (USD); less than the cost of a fully loaded Apple desktop computer.

Dubbed “Pepper,” the robot hit shelves throughout Japan by February 2015 and while the company isn’t forecasting actual figures it is expected that it will see trillions of yen in sales within weeks of the robot’s release.

SoftBank Robotics president Fumihide Tomizawa told Bloomberg News that the company “will sell Pepper in the United States within a year after gathering information in Japan.” Tomizawa added, “I won’t be surprised if Pepper sales will be half business and half to consumers.”

Pepper creator Son envisions a soon to be realized future where his robots could replace millions of jobs currently done by human beings working in the industrial labor force. The savings to manufacturing companies could be in the millions of dollars. Robots need general maintenance but no health care, sick days, vacation time or pensions which cost companies a large portion of their profits. Of course with the loss of jobs to robots comes the expected rise in unemployment, loss of tax revenue to governments and the increased burden to an already failing social welfare system. If the robotic age is coming fully upon human society it may be time to rethink how humans go about their daily lives and how governments and businesses operate in this newly developing paradigm.

For the average consumer Pepper could serve as a companion for the elderly or shut-in, a babysitter for the young, nurse to the hospice or housebound patient and helper for the handicapped.