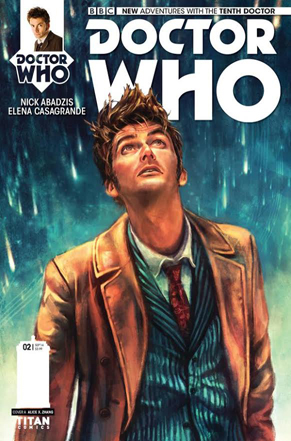 The New Adventures With The Tenth Doctor Who #1 and #2 cover the canon period soon after the tragic loss of Donna which put off the Doctor from engaging any new companions. Then he meets Gabriella Gonzalez (Gabby). A young woman seemingly going nowhere in life, stuck in a dead-in job at her father’s New York Laundromat, living small but dreaming big.

The Tenth Doctor #1 was released in July to great success and #2 is set for an August 27, 2014 release from Titan Comics.

Doctor Who: The Tenth Doctor #2 continues the story with Gabby after a vortex formed in every machine in her family’s laundromat. A strange devil-like vision appears in the vortex and it now haunts Gabby, her family and neighborhood. Her only help is another strange being who lives in an equally strange blue box and is known to her as simply The Doctor (played in the BBC live-action series by actor David Tennant).

This comic book series opens with Gabby and The Doctor facing off This Thing in a deserted subway car under the streets of New York City which will lead this young lady with big dreams on a life-changing adventure with the Time Lord. So begins a new chapter in the ongoing saga of The Tenth Doctor Who.

These new adventures with The Tenth Doctor #2 is written by Eisner Award winning author Nick Abadzis with illustrative art and colorization from Elena Casagrande (Angel, Star Trek) and Arianna Florean.

While never as good as live-action television these new comic editions of the Doctor Who verse offer fans continuing stories of their favorite Doctor. Tennant was, without argument, one of the most popular actors to portray The Doctor since Tom Baker back in the 1970’s. Fans have missed his brand of Whovian behavior and now Titan Comics gives those fans a small inkling of him in these illustrated adventures.

I recommend this edition to any Who fan and especially to those who cannot get enough of David Tennant as their favorite Time Lord.