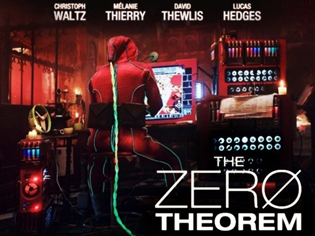 The Zero Theorem may be the most esoteric film to date from former Monty Python alum Terry Gilliam and that is saying a lot since he is responsible for some of the most memorable and bizarre films in cinematic history.

Gilliam has brought joy and mesmerizing cinema to moviegoers for decades with such landmark visual experiences and experiments in entertainment like Twelve Monkeys, Brazil, The Fisher King, The Imaginarium of Doctor Parnassus and Time Bandits.

It is the story of an unfulfilled computer hacker with an insatiable drive to uncover the mystery and reason for human existence. His never ending quest meets roadblocks at every turn from the sinister and strange intruder simply known as Management, that is until Qohen meets true love for the first time in his calculating life.

The Zero Theorem USA release date in theaters nationwide is still TBA with release on Blu-ray and DVD soon to follow.

Here is Terry Gilliam in an interview from two months ago in the UK discussing the film. The interview is a full release except all clips of the movie have been removed due to licensing: