Screenings of The Crow (with a First Friday Superhero Photo booth), Teenage Mutant Ninja Turtles (with a Pizza Party), Superman II – The Richard Donner Cut (where you can create your own Superhero Undies) & The Dark Knight (with Batman Trivia & Comic Giveaway), all in the comfort of their cinema where you can enjoy beer & wine during the film and now with the addition of Food Trucks at select screenings coordinated by Best in Show Management & Phoenix Street Food Coalition.

The Crow. Shelly and Eric were very much in love. But no one gets married on Halloween, not in Detroit. Shelly is beaten by city boss Top Dollar’s thugs, only to die 30 hours later in a hospital. Eric is shot and pushed out a window. A year later death is no longer what it was as Eric Draven, accompanied by a Crow and gifted with new powers and a world of grief and pain, is brought back to life to avenge his love’s death. After all, love is forever. And some of us Believe in Angels. Friday June 6 with First Friday Superhero Photo booth (9-11pm). June 6-9

Teenage Mutant Ninja Turtles. This is the live-action, feature film adaptation of the cult comic book and the popular animated television show. After prolonged exposure to radiation, four teenage turtles–Michelangelo, Raphael, Leonardo, and Donatello–have mutated into ninjas and have begun living in the sewers of a large city. Under the guidance of a ninja master Splinter the Rat and television reporter April, the Turtles embark on a mission to run crime out of the city and battle the warlord Shredder. Friday June 13 Pizza Party! June 13-16

Superman II – The Richard Donner Cut. The Richard Donner cut of Superman II is an infamous legend come to life. Director Donner shot most of the sequel at the same time as his first blockbuster film, but somewhere along the line, the producers and studio lost confidence and brought in Richard Lester (The Three Musketeers) to rework the film, and receive sole credit. For years fans speculated on how different the final film was from Donner’s original until an underground copy appeared showing a fully formed feature. Donner’s cut provides alternate scenes for how Lois tests her hunch that Clark is Superman, the moment he reveals his identity, and how Lois unlearns that truth. Friday June 20 Create your very own Superhero Undies! June 20-23

The Dark Knight. The follow-up to Batman Begins, The Dark Knight reunites director Christopher Nolan and star Christian Bale, who reprises the role of Batman/Bruce Wayne in his continuing war on crime. With the help of Lt. Jim Gordon and District Attorney Harvey Dent, Batman sets out to destroy organized crime in Gotham for good. The triumvirate proves effective, but soon find themselves prey to a rising criminal mastermind known as The Joker, who thrusts Gotham into anarchy and forces Batman closer to crossing the fine line between hero and vigilante. Heath Ledger stars as arch villain The Joker, and Aaron Eckhart plays Dent. Maggie Gyllenhaal joins the cast as Rachel Dawes. Returning from Batman Begins are Gary Oldman as Gordon, Michael Caine as Alfred and Morgan Freeman as Lucius Fox. All screenings – test your Batman knowledge in our Trivia Contest & be in to win Batman Comics! June 27-30

For more on the FilmBar Film Series, listen to Summer’s interview with Andrea 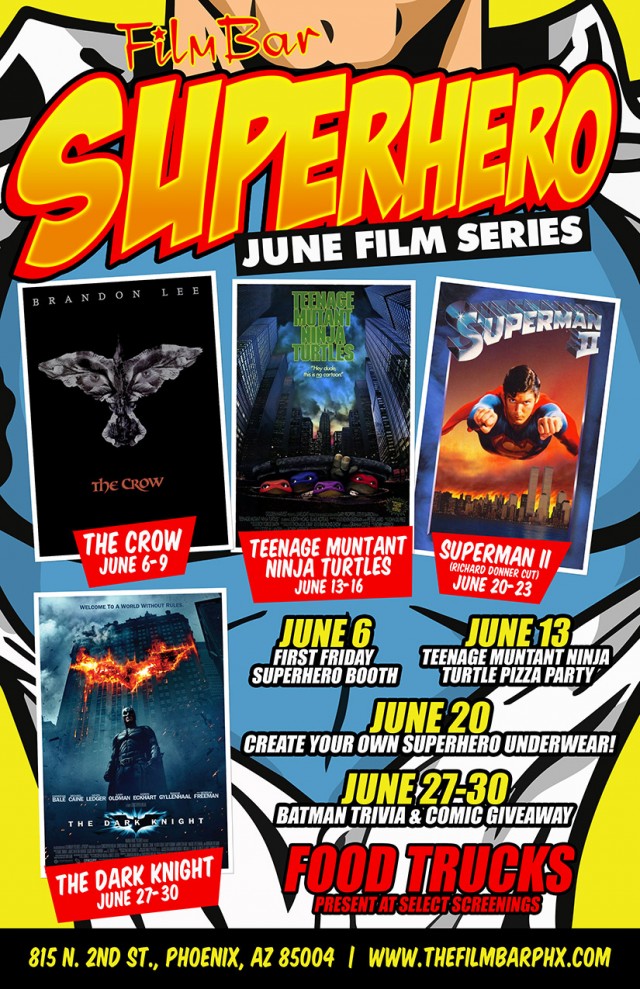