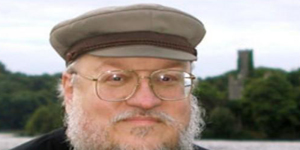 The Game of Thrones series finale may not premiere on HBO, the home of the award-winning series but could find its home on the big screen, according to the author of the series of books (A Song of Ice and Fire) George RR Martin.

During the season four public offering premiere Martin told The Hollywood Reporter (THR), and anyone willing to listen – which included just about everybody – that because the series finale episode would require a huge budget and grandiose effects not yet seen on the television venue, he expects the farewell to Thrones will likely be done as a major motion picture created specifically for theatrical release. The only question left unanswered was exactly when that would take place since the current run of the HBO epic series isn’t even midway through Martin’s book series, which the author is still adding on to.

Game of Thrones is in its fourth season and Martin is unsure how long HBO will continue with it. “Do we run for seven years?” pondered Martin aloud. “Do we run for eight? Do we run for ten? The books get bigger and bigger. It might need a feature to tie things up, something with a feature budget, like $100 million for two hours. Those dragons get real big, you know.”

In other news for Martin fans, his trilogy novella Tales of Dunk and Egg, a prequel to Game of Thrones are currently being considered for a theatrical trilogy of films. “They could be the basis for [movies],” Martin told THR. “I have written these three stories, and I have about a dozen more.”

All this is pure speculation on Martin’s part, he is known for thinking out loud even if the basis of what he says aloud is simply the musings of his own mind, however, some of us can remember many years back when George mused that Thrones would one day see the light of day on either the large or small screen and all these years laters it has happened, so we shouldn’t be too quick to put aside these current musings from this mind of a literary genius.